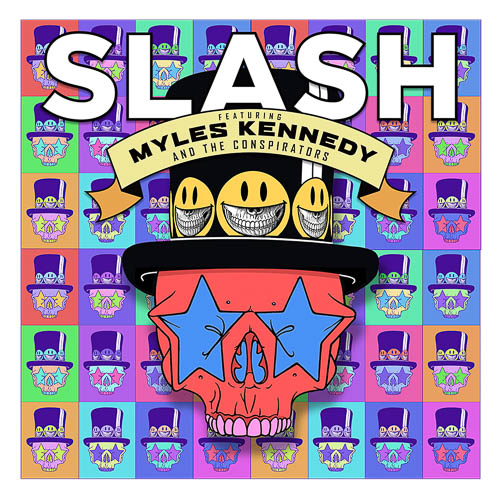 It’s been four years since Slash set the world on fire with a new solo album but it’s not like he hasn’t been busy touring the world with Guns ‘N’ Roses.  It’s not that I’m not a huge G’N’R fan, because I am, but I was wondering whether he would hold true to his promise for more solo records with Myles Kennedy and the Conspirators.   When you have one of the best rock guitarists ever joining forces with one of the best voices in rock, it is bound to be something special and I wasn’t ready for that to come to an end.  Thankfully, Slash and Myles are back together for Slash’s latest release “Living The Dream.”

This is Slash’s third album to feature Myles Kennedy and the Conspirators and although technically a solo album, it feels like a true band effort.  Produced by Michael “Elvis” Baskette, the album has a real cohesive feel while still allowing Slash to explore his musical stylings.  The record is full of bluesy riffs and ripping solos from Slash and rich, soaring vocals from Kennedy accompanied by the backbone of Todd Kerns on bass guitar, Brent Fitz on drums, and Frank Sidaris on rhythm guitar.  The first single “Driving Rain” is a perfect rock radio hit and “Slow Grind” give a great boogie blues vibe.  A stand out track is “My Antidote” with massive riffs, numerous tempo changes, and some of the best lyrics on the album with lines like “the song is my salvation.”

Slash’s poignant slow burning solo on the ballad “The One You Loved Is Gone” is outstanding and the eerie riff that opens up “Lost Inside The Girl” combined with brooding vocals from Myles makes the song a must listen.  Kennedy gives his best vocal performance on the mid-tempo “The Great Pretender” with a melodic solo from Slash that serves as a haunting extension of the vocals.

“Living The Dream” is another rock solid record from Slash and proof that when he and Myles get together magical things truly do happen.