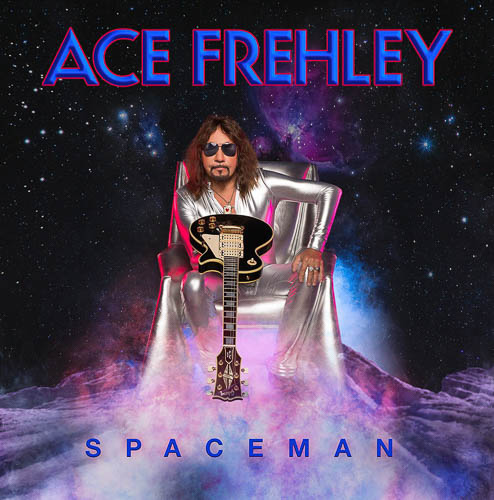 Twelve years of sobriety seems to have done a world of good for legendary guitarist Ace Frehley, ushering in an era of creativity that he hasn’t seen since his early years with KISS. After blasting off into the cosmos with 2014’s “Space Invader” and putting together an album of awesome covers with “Origins, Vol.1,”  Ace is about to drop his third solo record in only four years,  the highly anticipated “Spaceman.”

The new album contains nine new classic Ace songs and has the iconic axeman playing with all the piss and vinegar of his youth. Kicking things off is the fuzzy guitar riff of “Without You I’m Nothing,” a catchy rocker that features former KISS bandmate Gene Simmons on bass.  Next up is the slinky groove and sing along chorus of “Rockin’ with the Boys,” a song that Ace originally wrote back in the seventies heydays of KISS tours amidst  life on the road., a great rock anthem or cruisin’ song.  The beginning of “Your Wish Is My Command” starts off with a Queen like vocal intro before turning rocker with Simmons making another appearance on bass.  The screaming guitars of the first single “Bronx Boy” are fierce as the song hearkens  back to Ace’s pre-KISS days while “Pursuit of Rock and Roll” pays homage to Ace’s many musical influences and features Ace’s long time friend Anton Fig on drums.  Powerful guitars recharge the Eddie Money classic “I Wanna Go Back,” as Frehley reminisces of days gone by.  The record closes with the epic instrumental “Quantum Flux,” that features Ace’s guitar changing tempo from an acoustic jangle to full blown scorching before ending it with an outro a la “Black Diamond” from KISS’s debut album.