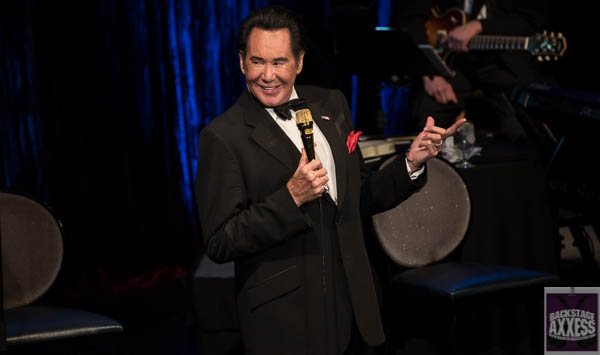 There’s not much that multi entertainer Wayne Newton hasn’t seen or done. He’s been in the business since 1959 when he moved to Las Vegas with his brother Jerry. Newton has made over 30 albums and has participated in numerous TV and movie roles. Known as Mr. Las Vegas to most, Newton had many residencies over the years there since 1959.  Now and then he does select shows outside of the area and when he does, it’s usually an event.  This past weekend, the Bears Den hosted back to back nights with Newton.

This was my first time seeing Newton perform live so I wasn’t sure what to expect.  Newton, is a true showman in every sense of the word. He told stories on how he got to be who he is today, he sang, played the acoustic guitar, fiddle and told jokes.  He also invited his commentator Kathleen McCrone (who at the end of the show revealed to be his wife) out and she asked pre- written questions submitted by audience members. Newton is known for his work with the military. In between telling stories he told how he built relationships with Bruce Campbell, Frank Sinatra, Elvis and Sammy Davis Jr. to name a few. He closed the song “When the Saints Go Marching In” with playing the fiddle. Newton showed his range on “My Way” and “Danke Schon.”

For the people who were in attendance Newton was charming, engaging and what you expect him to be. The show wasn’t built on him singing and performing the entire time. It was built on a nice mixture of showing past videos and storytelling. Mr. Las Vegas showed he can also be Mr. Niagara Falls when called upon.

Everyday I Got the Blues (B. B. King cover)

Help Me Make it Through the Night (Kris Kristofferson cover)

I Ain’t Got Nobody (Sammy Davis Jr. cover)