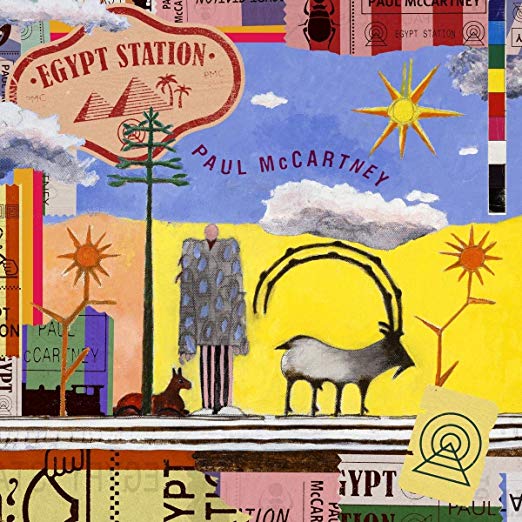 There isn’t much , if anything. that Paul McCartney hasn’t seen or done. His accomplishments are second to none and he could easily rest on his laurels and not even bother to write or record another song. The greatest living songwriter of any generation decided not to do that. He has spent the last few years writing his 18th studio effort titled “Egypt Station.” This album can almost be considered a double album as the standard release contains 16 tracks and the deluxe contains an additional two tracks. The album was recorded in 3 separate places which were London, Sussex and Los Angeles. The album was produced by Greg Kurstin and co-produced by Sir Paul McCartney himself.

Even though McCartney had his band contribute to the album he is still credited on both acoustic and electric guitar, piano, harpsichord, drums, Wurlitzer, synths, percussion, harmonica, Moog, bass and vocals. The record begins with the sounds of traffic and crowd noise, changing over to brilliant orchestral sounds of the introductory track “Open Season” before seguing into “I Don’t Know,” an exquisite piano driven lament. McCartney quickly changes the pace with the crunching guitar of “come On To Me,” a great rocker complete with “do, do, do” background vocals to complement Paul’s signature vocal tones. Listeners will enjoy the laid back vibe of “Happy With You” before getting the chance to rock out again with the distorted guitars of “Who Cares.” Sir Paul makes a simple yet perfect statement with “People Want Peace” and sings of love on “Hand In Hand.” Birds chirping and Brazilian rhythms define “Back In Brazil” before “Do It Now” closes the album in epic style.

There’s a reason why Paul McCartney is a legendary and iconic musician and singer/songwriter. Take a listen to “Egypt Station” to remind yourself why.