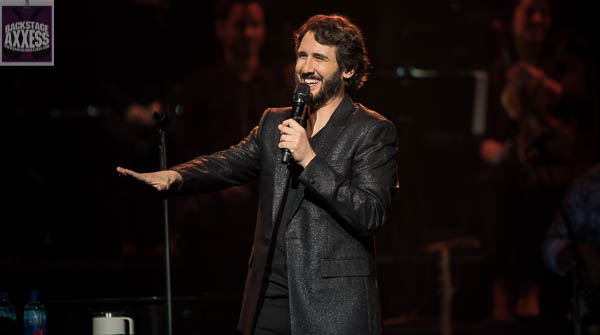 Adult Contemporary artist Josh Groban  made his first ever stop at the beautiful Avalon Ballroom inside the Fallsview Casino which would be the first of two consecutive sold out shows. Groban is on tour in support of his eight studio album “Bridges,” which was released last fall.  Groban was surrounded by his wonderful band which also included long time band leader/guitarist Tariqh Akoni  and the talented MB Gordy on percussion. His band also included a string section and choir as well.

Taking the stage at 8:05pm to a round of applause. Groban eased into “Pure Imagination,” which was made famous by the 1971 movie “Willy Wonka & The Chocolate Factory.” If the first song didn’t wet the audiences appetite, well the 2nd song sure did. Groban then went into one of his biggest songs “You Are Loved (Don’t Give Up)” which immediate grabbed everyone attention as some sang and some just closed their eyes and mummed along with Groban’s vocals.  Groban is well known for his high lyric baritone range but casual fans may not know that he is very engaging and has a great sense of humor.  Groban talked about how wonderful his first trip to the Falls has been. He was taken back by opening his curtain in his hotel room and seeing all of the Falls and its beauty right there in front of him. He also made fun of his attire as he is more of casual dresser but wore a nice dress coat and wore contacts which he quipped to his longtime fans, ” You know this must be special night if I put in contacts,” which drew lots of laughs.

Groban showed his powerful vocals on “Bring His Home.” He got behind the piano and tickled the ivories on both “Wandering Kind and “Play Me.” He also let his band enjoy the spotlight as they did two instrumentals “Marrakech” and “Musica Para Camina.” Groban who speaks 7 different languages, sang the Italian songs “Musica de Corazon” and “Alla Luce.” “You Raise Me Up” had people waving their cell phones in the air while singing along.

The highlight of the evening for me was the incredible performance of everyone together on stage for Simon & Garfunkel’s classic “Bridge Over Troubled Water.” The choirs harmonies behind Groban’s voice with the encompassing string section were eye opening and mouth dropping. It was flawless and worth the price of admission alone.

Overall, Groban’s voice is one of the best in business. His interaction with the crowd all night took it to another level. I must say what a performance Groban laid on the attendees in the Falls on Friday night!

You Are Loved (Don’t Give Up)

You Raise Me Up

To Where You Are

We would like to thank Alex Pederson from the Fallsview Casino for the credentials to review the show.