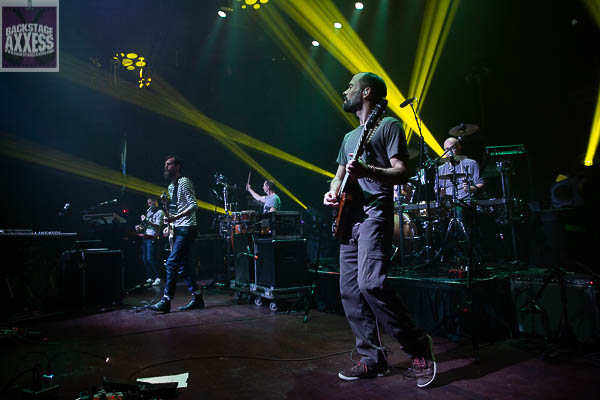 The Town Ballroom in Buffalo New York was the latest setting for an appearance of the jam electronica band Lotus. For nearly twenty years, Lotus has been relentlessly touring the world doing well over 100 shows a year. They have built a loyal following mainly by word-of-mouth. They have worked out their unique sound over the years with influences from funk, progressive rock, and EDM. The latest tour is in support of their triple length, 19-song compilation album “Frames per Second.” Lotus concerts are extended length jam sessions of relatively few songs played in a style that gives the band members freedom to improvise. As the crowd filed into the venue, many Lotus fans brought out cameras to record the show. Lotus follows in the footsteps of the Grateful Dead, allowing their fans to record their concerts. The band took the stage to an elaborate light show led by Brothers Jesse and Luke Miller on bass and lead guitar respectively. They are backed by Mike Greenfield on drums, Chuck Morris on percussion and Mike Rempel on guitar. Kicking of the show with “Aquamarine” from the 2010 album “Echoes Chapter II,” the crowd response was immediate, turning the room into one big dance floor. Once the dancing started it did not stop. Lotus is a very tight band and their show is full of enjoyable music that you can’t help but not to move to.  The band mainly focused on songs from their last four albums.  “Intro to a Cell” and “Blue Giant” let the band stretch out with the Millers leading the way. Luke’s guitar was soaring backed by Jesse’s intricate bass playing.

A hit list of songs followed with the “Age of Inexperience,” “Sunrain.” “Comptroller,” and “December Sun.” Each song gave the band members time to explore and improvise. They finished with the tune “Expired Slang” and a well deserved encore of the popular “Hammerstrike.” Fans lingered after the show ended as the band interacted with the crowd. Many fans were soaked and exhausted from the all-out exertion they gave during their show. To the delight of all in attendance, they promised to be back soon. From the reaction of many in the crowd, it can’t be soon enough.

Intro to a Cell

We would like to thank Bari Lieberman from Press Here Publicity for the credentials to review the show.