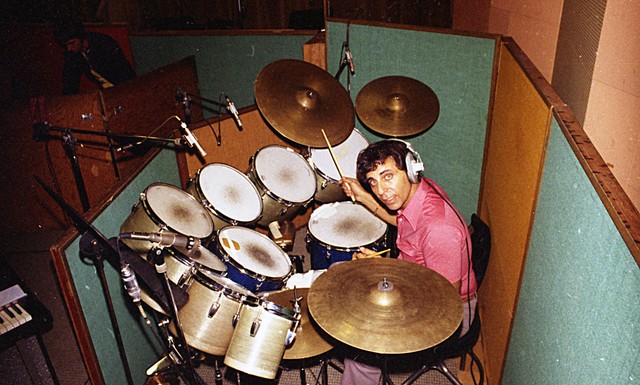 Drummer Hal Blaine, who propelled dozens of major hit records during the ‘60s and ‘70s as a member of the “Wrecking Crew,” Hollywood’s elite, ubiquitous cadre of first-call studio musicians, died Monday, according to a statement from family members on his official Facebook page. He was 90.

“May he rest forever on 2 and 4,” read the statement. “The family appreciates your outpouring of support and prayers that have been extended to Hal from around the world, and respectfully request privacy in this time of great mourning. No further details will be released at this time.”

According to a 2017 Modern Drummer feature by Dennis Diken (himself the drummer of the New Jersey band the Smithereens), Blaine appeared on more than 35,000 recordings, including some 6,000 singles.

“Blaine’s drumming could be found on all reaches of the Hot 100 — usually near the top,” Diken wrote.

Keyboardist Don Randi, a fellow member of the Wrecking Crew, told Variety, “He was a trend setter for rock ‘n’ roll drumming.”

He was featured on the majority of Phil Spector’s “Wall of Sound” productions, including the Ronettes’ “Be My Baby,” which featured perhaps the most indelible drum introduction in rock ‘n’ roll history. He also appeared on many of the Beach Boys’ best-known records (standing in for the L.A. band’s Dennis Wilson), including the classic 1966 album “Pet Sounds” and the experimental single from that same year, “Good Vibrations.”

Blaine appeared on such No. 1 hits as the Crystals’ “He’s a Rebel,” the Byrds’ “Mr. Tambourine Man,” Frank Sinatra’s “Strangers in the Night,” Simon & Garfunkel’s “Mrs. Robinson” and “Bridge Over Troubled Water,” the 5th Dimension’s “Aquarius/Let the Sunshine In,” the Carpenters’ “Close to You” and Barbra Streisand’s “The Way We Were.”

The most adaptable of studio percussionists, he also cut dates such notables as Elvis Presley (on both record and movie dates), Sam Cooke, Dean Martin, Jan & Dean, Johnny Rivers, the Monkees, Herb Alpert & the Tijuana Brass, Nancy Sinatra, the Mamas and the Papas, Cher, John Denver and Steely Dan.

In the end it may be easier to list the musicians he didn’t support during his years of work during the heyday of such Hollywood studios as Capitol, Gold Star, United, Western and RCA. His work also encompassed movie soundtracks and TV scores and themes.

One of the most versatile players on the L.A. scene, Blaine credited his popularity as a session man to his sensitivity to a song’s specific demands behind the kit. He told Diken, “I was like a painter as a drummer accompanist. I used my drumsticks sort of like a painter’s brushes. I filled in spaces and colored my work according to that given story.”

Blaine was inducted into the Rock and Roll Hall of Fame as a sideman in 2000 and received a Lifetime Achievement Award from the Recording Academy in 2018.

He was born Harold Simon Belsky in Holyoke, MA, on Feb. 5, 1929. His family moved to California in 1943. He studied with Roy Knapp, the teacher of Benny Goodman’s famed drummer Gene Krupa. He was active as a working musician for years, playing with Count Basie’s big band and behind such pop talents as vocalists Patti Page and Tommy Sands, before breaking into session work. Blaine credited his New Orleans-bred contemporary Earl Palmer for his entrée among the top studio talent.

“Earl was responsible for opening the doors of rock ‘n’ roll for me,” he told Modern Drummer’s Billy Amendola. “He was getting so busy that he started passing sessions my way.”

Via an introduction from saxophonist Steve Douglas, Blaine became the regular drummer on Spector’s fabled early ‘60s sessions at Gold Star, backing such hit-making acts as the Ronettes, the Crystals, Bobb B. Soxx & the Blue Jeans and Darlene Love.

His generation of informally dressed session musicians included in their number guitarists Glen Campbell, Tommy Tedesco and Barney Kessel, bassists Ray Pohlman, Joe Osborn and Carol Kaye and keyboardists Randi, Larry Knechtel and Al De Lory. They would eventually displace the more conservative studio players who preceded them in the ‘40s and ‘50s — the men Blaine referred to as “the blue-blazer guys.” This shift led to a unique sobriquet for the new Hollywood breed.

“I coined the name the Wrecking Crew,” Blaine told Amendola, “[because] all the guys in the suits would say, ‘Oh, no, these kids in their blue jeans and t-shirts are going to wreck the business.’”

Blaine eventually became an entrenched session animal, playing as many as three AFM studio dates a day and sometimes sleeping in the studio if he had an early morning gig at the same facility.

The vibe of the classic ‘60s studio scene was lovingly recreated in Bill Pohlad’s 2014 Brian Wilson biopic “Love and Mercy,” in which Blaine is portrayed by Johnny Sneed.

He issued four albums of instrumentals under his own name between 1963-68.

Blaine would emerge to play the occasional live gig at the height of his Hollywood popularity. In June 1967, he served as the “house drummer” at the Monterey Pop Festival, backing acts that didn’t feature a self-contained band; there, he supported Rivers, Laura Nyro, the Mamas & the Papas and Scott McKenzie.

However, as Blaine noted in Denny Tedesco’s 2008 documentary “The Wrecking Crew,” the sea change in popular music that emphasized artists who both wrote and performed their own music, like the stars who emerged from the Monterey festival, eventually led to the end of the Wrecking Crew’s glory days in the early ‘70s.

The rock session work largely dried up, and Blaine and some of his contemporaries gravitated more and more to film and TV work. His drumming can be heard on the themes of such sitcoms as “Three’s Company” and “The Brady Bunch.”

Late in life, the much lionized and often imitated Blaine maintained a profile as a pro musician, appearing at trade shows like NAMM in L.A. on an almost annual basis and holding workshops and drum clinics around the country.

In February 2019, he played at his own 90th birthday party at Don Randi’s Studio City club, the Baked Potato; the event’s guests included Charlie Watts of the Rolling Stones and Denny Seiwell of Wings.

“It was such a marvelous night, to see all the famous drummers of the world there,” Randi said. “All the drummers who emulate him were there to hear him play those special licks.”

Blaine was married and divorced five times. His survivors include daughter Michelle.