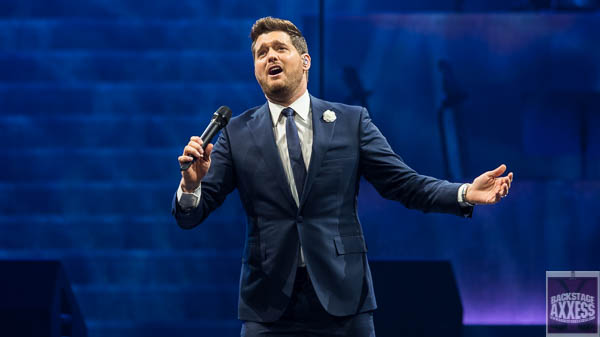 On tour in support of his 10th studio effort titled “Love,” British Columbia vocalist Michael Bublé graced the stage at the KeyBank Center this past Wednesday night. The tour dubbed “An Evening with Michael Bublé” really was just that. His 35-piece band was something to behold. The band consisted of a string section, horn section, and a few backup singers.

Buffalo audience got to see all sides Bublé. Few artists can work an audience like the crooner. The female dominated audience was a mound of clay and Bublé worked and shaped it all night long. Due to the weather, Bublé took the stage about 30 minutes late. After the band started to play the beginning of “Feeling Good” the massive circular video screen lifted and Bublé appeared at the top of the stage.  He started to sing and gingerly made his way down to the front of the stage. After “Haven’t Met You Yet,” Bublé talked to the audience for a few minutes. He joked that he thought he would be playing to an empty house due the weather. Called them a hardy crowd and determined for coming. He also said “If I did have to play, I might have to do an 8 hour show because we will get snowed in.” He made a few jokes with the crowd and also said he has always loved Buffalo. Then he said that New England Patriot fans wish they were you right now which drew a big cheer from them before he jumped into “My Funny Valentine.”

During the show, Bublé looked for an audience member to sing a song. He randomly picks someone out to do this. He joked that the woman from the previous nights show was scary and not good at all. So he asked for the participant to bet better than that. Well, he had no idea what was in store for him when he chose Nicole Zahn from Buffalo. She took that microphone and belted out portions of “Hallelujah,” which was eye popping. It even shocked Bublé so much that I believe he took the mic back quicker than expected.  She got a round of applause for her efforts (editor’s note: we attached the video below).  Next up to showcase his stuff was trumpeter Jumaane Smith who came out from behind his spot and worked the entire stage as she sang “You’re Nobody Till Somebody Loves You.”

Bublé brought out a portion of his band to the extended stage to sing a few tracks “Buona Sera Signorina,” “Just a Gigolo”/”I Ain’t Got Nobody,” then Chuck Berry’s “You Never Can Tell.” They had some cool light lanterns bob up and down from the ceiling as the songs were being played.  He dedicated “Home” to the servicemen and women as everyone held up their cell phones that lit up the arena as she sang the song. He closed the set with a 3 song encore that included the Brenda Lee classic “Always on my Mind.”

The crooner has the pipes and swagger to lead any audience. He lets his band lead at times and gets the audience involved. He showed the fans in Buffalo he still loves them and the fans showed him back tenfold!

Haven’t Met You Yet

I Only Have Eyes for You (Harry Warren cover)

Such a Night (Johnnie Ray cover)

When Your Smiling (Seger Ellis cover)

When I Fall in Love (Jeri Sothern cover)

Just a Gigolo/Ain’t Got Nobody (Louis Prima cover)

Where or When (Rodgers & Hart cover)

We want to thank Kevin Kennedy from Pegula Sports Entertainment for his assistance in obtaining the credentials so we can review the show.