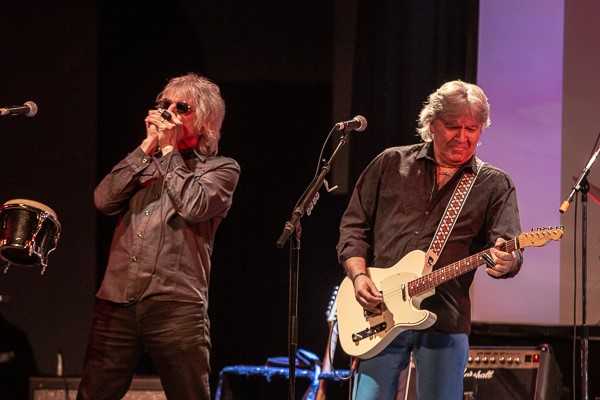 When using the word “legendary” to describe something, often times it is not applicable to the subject. When talking about The Yardbirds, calling them Legends may not be enough to describe their influence on modern rock music. The Tralf Music Hall in Buffalo New York was their latest stop on their 2019 Tour of America. Original member drummer Mike McCarty has put together a solid group of musicians to perform the bands classic lineup of songs. The room was buzzing with anticipation as opening act The Dave Viterna Band took the stage. Viterna has been playing for 30 plus years both locally and nationally. His guitar playing rivals some of the best players in today’s music scene. His set was full of classic rock and roll, a tribute to the recently passed Dick Dale, and some blues standards. Viterna and his bandmates have a lot of fun while they’re playing and a crowd responded with a standing ovation for his first appearance on the Tralf stage.
After a short break, The Yardbirds took the stage to “heart Full of Soul” with Brit John Idan handling lead vocals. The sound was authentic. This was not some touring cover band. This was the real thing. Next up was a slow blues tune “Drinking Muddy Water, an obvious tribute to another Legend (Muddy Waters) The band cruised through a string of hits including “Little Games,” “Shapes of Things,” and “New York City Blues.” Recently added guitarist Godfrey Towsend played alongside harmonica player Mike Scavone and bassist Kenny Aaronson. All three hail from NYC, adding their credentials to the legitimacy of this line up. Of course McCarty, being a founding member, is as legit as can be.
The run of songs at the end of the show was perfect. The iconic “For Your Love,” “Happenings Ten Years Time Ago,” and “Dazed and Confused” brought the audience to their feet. They did not sit down until the band returned for a two song encore that included a wild “Train Kept a Rollin” and finishing with “I’m a Man.” After a long ovation, the band took their final bows a slipped off stage. The crowd however, lingered on with thoughts and memories this night’s music stirred up. If the Yardbirds get close to your city, make sure you get out and see them. It will be a night you’ll never forget!
Setlist:
Heart Full of Soul
Drinking Muddy Water
You’re A Better Man Than I
The Nazz are Blue
Little Games
Shapes of Things
New York City Blues
Back Where I Started
Evil Hearted You
Lost Women
Over Under Sideways Down
Smokestack Lightning
For Your Love
Happenings Ten Years Time Ago
Dazed and Confused
Encore:
Train Kept A Rollin’
I’m A Man
We would like to thank