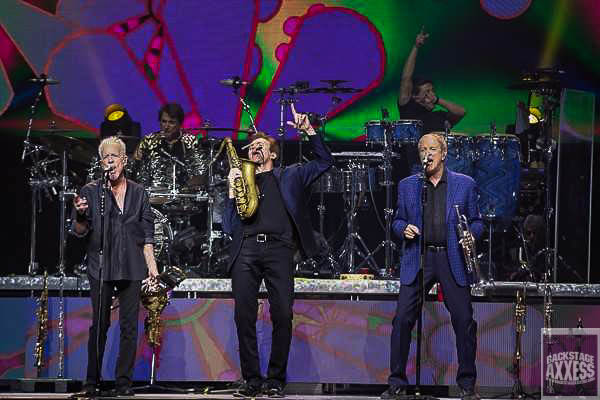 The Fallsview Casino Resort in Niagara Falls, Ontario was the setting for the latest tour stop of Chicago, the Hall of Fame band formed in 1967. It was a very different music scene back then and Chicago is one of those bands that has changed personnel and musical styles over time and still remains as popular as ever.  Founding members Robert Lamm (keybords, vocals), Lee Loughnane (trumpet, vocals), and James Pankow (trombone, vocals) lead the 10 piece All Star lineup. Neil Donnell joined last year from a Chicago cover band and has stepped into the lead vocalist role. Although many band members and producers have come and gone, Chicago still remains true to the horn-based rock sound.
Opening the show with “Questions 67 & 68,” the band’s first single ever from their debut album Chicago Transit Authority paved the way for an evening of greatest hits and some surprises. Donnell has a voice that mimics departed bassist Peter Cetera. On the acoustic opening of “If You Leave Me Now,” it was as if Cetera was onstage singing. Donnell has filled a void and allowed Chicago to play some of its most well-known songs without fear of sounding like a cover band. “Make Me Smile” opened with that great horn fanfare and just got better as the whole band joined in the classic. During a medley of lessen known tunes starting with “So Much To Say, So Much To Give,” the band stretched its legs and let each musician shine with a solo or feature. Loughnane took the lead vocal on “Colour My World” and the show started to take on a feel of a journey through time with Chicago as the guide.
A band that spans 50 years of music and is as talented as this group, left no part of their catalog untouched. “Old Days,” “Hard Habit to Break,” and “You’re the Inspiration” brought the crowd to their feet and they stayed standing through “Beginnings” and “I’m a Man.” Everyone in the room felt a connection to this performance. The band knew it and responded with enthusiasm. Even though pieces of the band are into their 70’s, they still play with fire and passion of a 20 year old.
The encore of “25 or 6 to 4” brought the show to a close with a screaming and clapping audience at the mercy of the band. It was a replay of an earlier time. When the music was great, the vibe was cool, and everything was righteous. It was this music that told the story of a  younger generation at the time. On this night there was no better storyteller than Chicago!

Questions 67 & 68
Dialogue (Pt I & II)
Wake Up Sunshine
Call On Me
(I’ve Been) Searchin’ For So Long
Mongonucleosis
If You Leave Me Now
Look Away
Make Me Smile
So Much To Say, So Much To Give
Anxiety’s Moment
West Virginia Fantasies
Colour My World
To Be Free
Now More Than Ever
Set 2:
Alive Again
Does Anybody Really Know What Time It Is?
Old Days
Hard Habit To Break
You’re The Inspiration
Beginnings
I’m A Man (Spencer Davis Group cover)
Street Player
Just You n’ Me
Hard To Say I’m Sorry/Get Away
Saturday In The Park
Feelin’ Stronger Every Day
Encore:
25 or 6 to 4

We would like to thank Alex Pederson from the Fallsview Casino for the credentials to review the show.