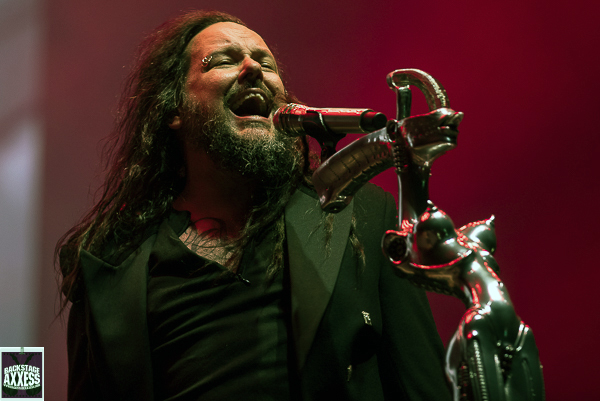 Last weekend,  the small town of Rockingham, North Carolina truly became the epicenter of the music world  as tens of thousands descended upon the North Carolina sandhills for the inaugural Epicenter Festival. Brought to us by the fine folks at Danny Wimmer Presents,  the festival  featured three days of music as well as plenty of other entertainment options . The Rockingham location was situated across the street from the Rockingham Motor Speedway and  provided plenty of flat, level ground for both the festival as well as campers. The  festival was promoted as a camping festival  offering festival goers the unique opportunity to partake in a true music festival experience. The Rockingham Village was designed to accomodate the needs of both campers and daily attendees and was open  late, until 3am with a wide variety of food, beverage, and merchandise available. The Village also featured its own stage with Thursday evening performances to kickoff the campground party including Charlotte rock band Killakoi who had the distinction of being the first band to play the festival. In addition to Thursday evening, the Village Stage was going daily with the Hellzapoppin Circus Sideshow and was also the scene for Eddie Trunk, Don Jamieson, and Jim Florentine doing an onsite That Metal Show with various guests over the weekend.

Things got started early on Friday afternoon with the grounds opening at noon providing ample opportunity to check out the various offerings before the music started. There were four stages set up with two smaller stages side by side and the two main stages not that far apart separated by the VIP area. It was a nice layout that made for an easy walk to pretty much anywhere you wanted to go. Although there were a few sprinkles around, Friday’s schedule went off without a hitch. I tried to catch as many bands as I could but it’s simply not possible to see them all. Black Coffee  was the first band of the day to play and it was well worth getting there early to catch their set. They had a cool, classic rock type vibe and  it will be fun seeing their career really take off. One of the largest crowds of the afternoon was for Beartooth. Despite some pretty solid rain, fans were completely into the performance and the crowdsurfing really got going. I was a little surprised to see Machine Gun Kelly with such a prime spot on the bill but once he started to perform I totally understood why. He was all over the stage, jumping, posing, and throwing down. His drummer also has exceptional style, standing on his kit and throwing stick up in the air. MGK even ran down into the pit and all the way up the center aisle to the soundboard where he climbed up the scaffolding to perform.  The big guns were up next as Evanescence took the stage led by the exquisite vocals of Amy Lee. The last time I saw the band they were performing with a symphony orchestra and it was a very subdued show so it was great to see them back in their element rocking it out yet again. The master of horror, Rob Zombie, was  next, closing out the Quarry Stage for the evening. He always puts on a great show with an outrageous stage production and tonight was no exception. At the core of  it all, though, is the music. Zombie is a great songwriter who really has catchy tunes that stick with you and have an undeniable groove. Nu-metal masters Korn were the last to play, closing out the Monster Energy Stage. With frontman Jonathan Davis leading the way dressed in dark shirt and kilt, it was non-stop action all set long. The LED screens at the rear of the stage featured brilliant  lighting and scenery that changed throughout the evening.  It was a whirlwind of action with guitarists  Brian “Head” Welch and James “Munky” Shaffer  spun, twirled, and ran all over. The highlight of their set was the audience singing the chorus of “Y’all Want a Single.”  It was a perfect ending to day one.

Day two was of course the most exciting of the weekend due to the weather issues that Saturday brought. The forecast for the day was grim with strong thunderstorms expected so it was one eye on the band and one eye to the sky for most of the day. Things got started with an up and coming metal band from New Zealand called Alien Weaponry. I had never seen them before and from the second they hit the stage, I was more than impressed. The band’s music was on point and their performance was tight with a remarkable stage presence for such a young band. They are definitely a band to watch out for.  People were buzzing about the band Shvpes all day so I made a point to go check them out. The band is fronted by vocalist Griffin Dickinson, son of Iron Maiden frontman Bruce Dickinson. That is where the similarities end though as Shvpes has their own distinct flavor with a nice metal and almost hip-hop mix, maybe even dance metal. Either way, Shvpes is another band to put on your must check out list. Another young band moving up the ladder quickly is Badflower led by vocalist and guitarist Josh Katz. They are really coming into their own and huge things will be happening in their not too distant future.  American super group The Damned Things hit the stage next. The band members are some of the most successful in the industry with Joe Trohman and Andy Hurley of Fall Out Boy, Scott Ian of Anthrax, Keith Buckley of Every Time I Die, and Dan Andriano of Alkaline Trio. They recently released their first new album in nine years “High Crimes,” and it’s definitely great to see them out touring. Crowd favorite Motionless In White was up next with their thrilling live show full of smoke and fire and outstanding performances by all.  It’s been great to see this band go from a tiny club setting to playing huge festivals. They have an album coming out in June and it seems the sky is the limit for these guys. As I made my way over to the other stage for Black Label Society, the sky was looking a bit fierce off to my left. Zakk Wylde and company came out and hit it hard from the start with “Stillborn” as the crowd of Berzerkers went crazy. Zakk is not only an outstanding player but also a master showman  and along with the rest of the band sounded amazing as always. It was somewhere in the beginning of their third song that Zakk made the announcement that they had to shut it down for a bit. A few moments after that, an evacuation was announced. I had just made it back to my car before the rains came. It looked like quite a storm that rolled through and the festival was forced to shut down for the remainder of the evening.

The weather for day three was supposed to be even worse and as I arrived at the venue, it wasn’t clear how long we would have until the storm gods would let loose upon us again. There was quite a bit of damage from Saturday’s storm and the crews must have worked in earnest to get the stage repaired and the grounds ready for opening.  After the storms on Saturday, it definitely looked like quite a few people had made the choice to stay home and not risk it. Fortunately, there was no severe weather and despite a little bit of rain, Sunday turned out to be a great day for music and things went off without a hitch. One of the acts that I was unfamiliar with was Yungblud and yet again I was completely blown away by his set.  He took the stage in what appeared to be a woman’s nightgown of some sort and kicked things off with “21st Century Liability.” The young English artist is a mix of alternative rock with a lot of punk thrown in as he jumped all over, sticking his tongue out and making obscene gestures to the crowd’s delight. At one point, he threw his guitar behind him, smashing it before grabbing his guitarist for a full on kiss. Later in the set, he took his turn in the pit, crowdsurfing and letting the fans get up close. I was really excited to see Reignwolf’s set as well. They have a distinct garage rock kind of sound and vocalist-guitarist Jordan Cook was amazing, even jumping off a drum at the front of the stage. It’s easy to see why they have garnered such a fanbase from their live shows.  The politically charged metal of Fever 333 was next up with a stage show unlike any other. Vocalist Jason Aalon Butler was everywhere, overturning monitors, standing on speakers, and jumping like crazy. Guitarist Stephen Harrison climbed the scaffolding at the soundboard to perform from on top of the tower. They are always a band that puts on a great show and the crowd loved every minute of it. Sticking with the political vibe, Tom Morello was playing on the smaller stage. He started his set to a screen full of images and statements before everyone realized he was in the crowd playing. Although he did through in a Rage Against the Machine song or two later in the set, this set was all Tom Morello and his message. Bring Me The Horizon brought what was probably the best show of the weekend with them, featuring an elaborate stage set up complete with smoke, flames, and a bevy of dancers. Front-man Oli Sykes sounded terrific as did the rest of the band. Every time I see them, they get better and their show gets bigger, so it will be cool to see what they come up with next. The rock, reggae vibe of 311 was up next and before the band came out you could hear the three-eleven chants through the crowd. The band sounded awesome and they ran through a solid set of fan favorites. Of course, the main attraction of the night was still to come as Foo Fighters were finishing off the night. What can one say about the Foo that hasn’t already been said? Dave Grohl  is simply one of the best and the band puts on one hell of a show each and every time they play. I literally had chills during the chorus of “My Hero” as the crowd was singing along. It was absolute perfection and even after a two hour set, nobody wanted it to end.

The very first Epicenter Festival will be remembered for a lot of things, the music, the weather, and  special memories made among friends. Who’s already looking ahead to next year?

Falling Away From Me

Freak on a Leash

The Sky Is a Neighborhood

Stay With Me (Faces Cover)

We would like to thank Selena Fragassi of FR-PR and Kristine Ashton-Magnuson Media for the credentials to review the festival.