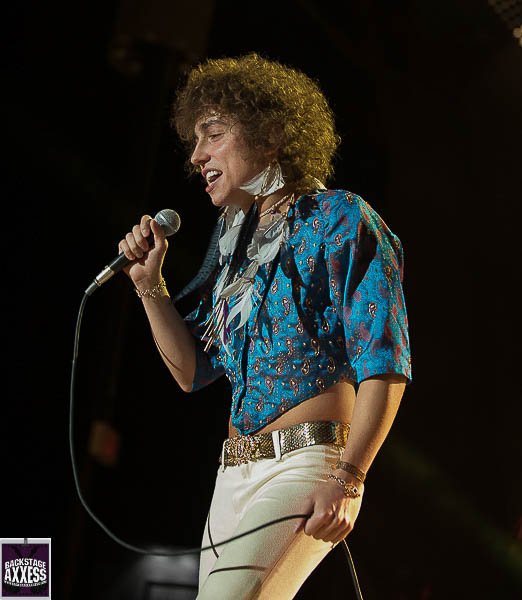 If you asked someone about Greta Van Fleet just a few years ago, chances are their response would have been, “Who?” After being signed to Lava Records in 2017, the young rockers from Frankenmuth, Michigan began their meteoric rise to the top. Just a month after signing their deal with Lava, the band released their debut EP “Black Smoke Rising” with the hit single “Highway Tune” topping the Billboard Rock charts.  “From The Fires,” the band’s second EP and single “Safari Song” followed a few months later. Everyone was digging their classic, blues rock vibe and the Led Zeppelin comparisons were constantly being made.  Greta Van Fleet is much more than a Zeppelin knock off. In fact, the band has a wide array of influences including not only rock, but jazz,  folk, and world music as well. After a ton of small club dates, the band quickly found themselves on the bill of major music festivals garnering them n ever-growing fan base. Their first full length album “Anthem of the Peaceful Army” was released in October of 2018 to much critical acclaim. In just a few short years, Greta Van Fleet has grown by leaps and bounds and is now in the midst of a headlining tour of their own.  Wednesday evening they made a stop in the Queen City at the Charlotte Metro Credit Union Ampitheatre, playing to a sold out crowd.

The venue was buzzing with excitement and chants of Greta! Greta! could be heard all around as fans waited for the band to take the stage. As the stage lights went dark, the venue literally erupted with cheers and the band came out on the stage. Vocalist Josh Kiszka had a bouquet of white flowers that he was tossing out to fans in the audience and I’m pretty sure by the level of screaming that the young girl behind me caught one of the coveted flowers. “The Cold Wind” kicked things off bringing the crowd to its feet.  I don’t think anyone sat down at all the entire evening.  Bass guitarist Sam Kiszka also took a turn behind the keyboards and the granddaddy of them all; the Hammond B3. He alternated between both the bass and keys throughout the set. Guitarist Jake Kiszka is not only technically proficient but also plays with an emotion well beyond his years. Drummer Danny Wagner provided a solid backbone behind his kit and had a chance to shine during the encore which included a drum solo. Vocally Josh is a lean, mean singing machine. He really sounds great in a live setting and his voice carried throughout the venue. Greta Van Fleet has also gained a lot more confidence since the first time I saw them play in a tiny, hole in the wall club. Their stage presence keeps getting better and better and this time as a headliner, they had a great lighting show along for the ride. One of my favorite songs of the night was “You’re The One” which has Jake bringing out the acoustic guitar. It was a beautifully done song full of emotional highs and lows, the kind of performance that gives you chills even on a warm Carolina spring night. After closing out with “When the Curtain Falls” from the latest release, the band returned for a one song encore. Yes, it was the song most fans had been waiting to hear all night, “Safari Song,” and  it was well worth the wait.

Great Van Fleet is a breath of fresh air in a time when many young bands are leaning towards metalcore or a hip-hop mix.  They are doing their own thing and doing it extremely well. This is definitely  a must see show. Check them out this when they hit a city near you and see for yourself what all the hype is really about. You’ll be glad you did.

When the Curtain Falls

We would like to thank Selena Fragassi from FR-PR for the credentials to review the show.