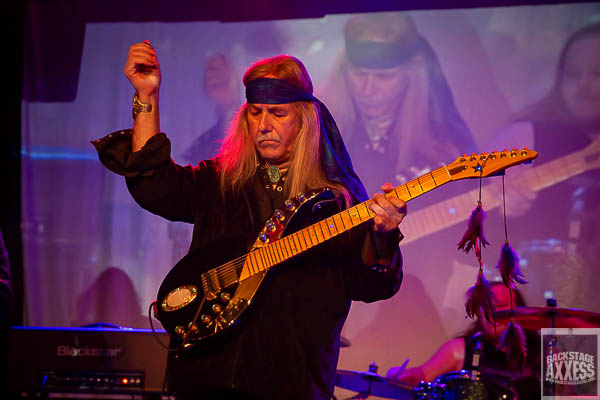 Uli Jon Roth brought his “Triple Anniversary” tour to the Ironworks this past Tuesday in the Queen City to celebrate 50 years of his musical career. Roth’s notoriety as a guitar player and music innovator began in the early 70’s when he joined the Scorpions for their first 5 albums. Destined to play solo, Roth left the band and formed Electric Sun and started to explore the neo-classical guitar style he plays to this day. Early influences of his included Eric Clapton, Jimi Hendrix and Jeff Beck were expanded upon and evolved into an eclectic style that has separated Roth from the usual, fast-playing guitarists of the day. The innovative player invented the Sky Guitar, a seven string, seven octave guitar with up to 38 frets that costs upwards of $38,000.00 (for the most complicated model). They are hand made and can be ordered through his website with a waiting list of a year or more.
Roth brought two Sky Guitars with him for this tour. Roth was joined onstage by two additional guitarists, Niklas Turmann and David Klosinski who were extraordinary guitar players in their own right. This allows Roth to explore his style without fear of losing the integrity of the music. With this arrangement, Roth plays with a controlled chaos. Using his unique instrument, he is free to venture into areas that no other guitarist but him can go. From the opening notes of “Sky Overture,” it was clear you were not at a regular rock concert.  Roth plays with technical precision and every note is where it should be. The first set included songs from Electric Sun while the second set explored the Scorpions songbook. “Don’t Tell The Wind” was a touching tribute to Roth’s younger brother Zeno, who passed away last year. “Icebreaker” was hard rocking number that let band members rock out and have some fun. “Starlight” from the Roth project Sky of Avalon, was a dreamy venture into the neo-classical genre that saw Roth exploring the Sky Guitar to it’s fullest potential. The second set saw Roth going way back to the Scorpions early days with songs like “We’ll Burn The Sky” and “In Trance” where Roth led the band’s hard rock sound, playing complicated runs with relative ease.
Being the innovator that he is, Roth broke out “All Along the Watchtower” in a crazier style than Hendrix could ever imagine. Finishing with “Yellow Raven” and “The Sails of Charon,” Roth ended the more than three hour show with the crowd yelling for more. Roth, in typical low key style, thanked them and promised to be back. As this tour winds down, don’t miss it if it comes close to your city. The chance to see one of the top guitarists in the world playing a huge variety of his music doesn’t come along often.

Sun In My Hand (Scorpions song)

I’ll Be There (Electric Sun song)

All Along The Watchtower (Bob Dylan cover)

The Sails of Charon (Scorpions song)

We would like to thank Chip from Chipster PR for the credentials to review the show.