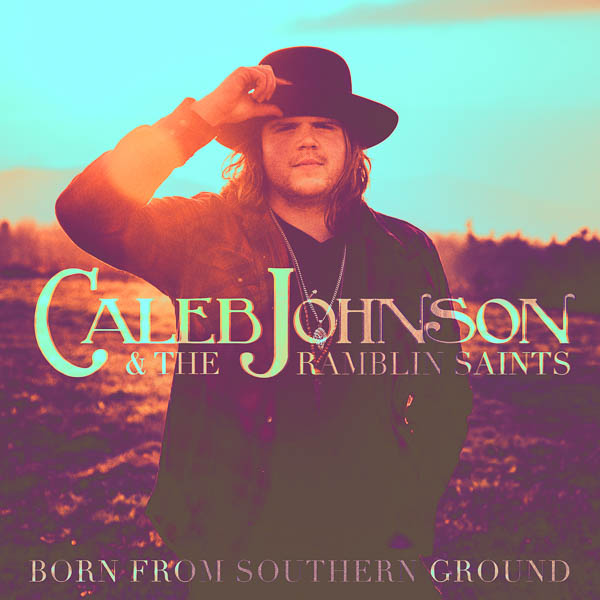 Today’s the day for “American Idol” Season 13 winner CALEB JOHNSON to finally release his second album, BORN FROM SOUTHERN GROUND, on all digital formats via Big Johnson Records. Videos for “Born and Raised,” “Solid Gold” and “Sugar” are streaming now on his official YouTube page.
With a new band, CALEB JOHNSON & THE RAMBLIN SAINTS—Josh Sawyer (lead guitar), Brennan Dugen (bass)–soulfully and bombastically take us to the church of rock ‘n roll. JOHNSON uses this album to showcase his southern roots and he channels a spirit that combines gospel, blues and rock n roll into a modern but classic and timeless sound that Gearphoria described as “…an earthy, 10-track bowl of tasty rock-and-soul gumbo…JOHNSON and his band deliver a solid, memorable offering.”
“Solid Gold” was co-written by Rival Sons lead singer Jay Buchanan and Blair Daly, who co-wrote most of the songs on BORN FROM SOUTHERN GROUND with JOHNSON. “I hold the highest admiration and respect for both Blair and Jay as musicians and people,” explains JOHNSON. “I’ve been fortunate to have written some of the best songs of my career with Blair, and have been a massive fan of Jay’s voice and his band Rival Sons since 2010! I am honored that they would let me record ‘Solid Gold.’ The meaning of the song resonates deeply with me, because it is an anthem of pursuing your dreams and never giving up. I feel a lot of people can relate to that message on any given level of life. And singing ‘Solid Gold’ is a full circle moment for me, because I went from singing a Rival Sons song on ‘American Idol’ to having a song on my album written by the singer of that band!”
The new album has been close to four years in the making. It was recorded at Zac Brown’s Southern Ground Studio, where he enlisted the help of his three-time Grammy®-winning multi-instrumentalist cousin, Bryan Sutton, to co-produce the album. According to JOHNSON, “Bryan brought my vision to life. Making this album was one of the purest, most enjoyable experiences I’ve ever had. Bryan let me be me.” Sutton brought in some of Nashville’s A-list musicians to form the studio band, including Audley Freed, Kenny Greenberg, Fred Eltringham, Mike Webb, Tony Lucido, Angela Primm, Gale Mayes, and Devonne Michelle. His childhood friend and long-time guitar player Josh Sawyer also sat in on the sessions, giving the album a home grown feel.
“This is the album I’ve always wanted to make and I’m super excited for people to hear it”, declares CALEB JOHNSON. “It’s real, raw and honest. Music is a religious experience and can be life changing. Moving forward I hope this album will inspire others the way I was inspired when I first heard the gospel through rock ‘n roll.”
After being crowned the winner of Season 13 of “American Idol,” CALEB JOHNSON went to work recording his first album, TESTIFY, with a major label. It debuted at #1 on the iTunes Rock chart and #24 on the Billboard “Top Album Sales” chart. He was subsequently recruited as an opening act for some of the biggest touring bands in rock n roll: KISS, Cheap Trick, Sammy Hagar, Joan Jett & The Blackhearts, and Black Stone Cherry, to name a few.
BORN FROM SOUTHERN GROUND delivers a heaping dose of gritty southern rock swagger starting with the earth-shaking gothic gospel of “Holding On” in which JOHNSON displays a fearlessness and vocal power unmatched. Next up is the ethereal swampy stomp of “Solid Gold,” a “Kashmir”-like anthem that proclaims: “Dream your dream like a fire that never goes cold!” On the overtly sexual electrified funk of “Sugar,” he wails like a deep-fried Steven Tyler with a side of James Brown. “Born and Raised” has JOHNSON proudly belting the tale of his Southern upbringing with a Crowes and Seger flavor. The soulful spine-tingling ballads “Better off Alone” and “Blind” has JOHNSON showcasing his soaring four-octave range that goes from buttery smooth to volcanic conviction. The whiskey-soaked bar anthem “Hanging With The Band” takes listeners back to simpler times with an homage to summer partying and classic rock radio. The album shifts to a heavier sound with the grinding metal motor cycle crunch of “Ride with the Devil.” The drums pummel and the guitars scream while he growls, “you ride with the devil, you never get your soul back,” warning listeners that if you live by the sword you die by the sword. Rounding out this monster of an album is “It’s Not the End,” an uplifting power ballad that would make Meat Loaf weep, and an acoustic version of “Hanging With the Band” that tips its hat to early era Rolling Stones.