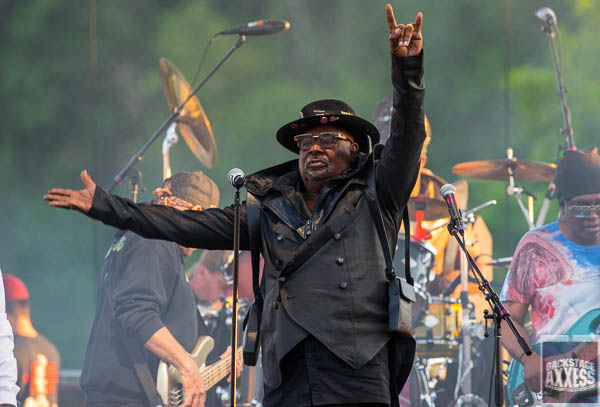 A triple bill of music invaded this past Tuesday’s Artpark stage with Miss Velvet and the Blue Wolf, Fishbone and the legendary George Clinton’s Parliament-Funkadelic. This was an earlier show due to the 3 band billing as Miss Velvet and the Blue Wolf ended up taking the stage around 5:45pm. The 9-piece outfit led by Miss Velvet’s powerful vocals mixed rock, rhythm and blues and splashes of hip hop made a unique sound all of their own. Their 45-minute set consisted of songs off of their 2017 debut “Bad Get Some.”  They definitely made some fans and open up a lot of eyes and a nice debut for the 1st ever performance in the WNY area.

Next up was Fishbone. It’s hard to believe but the band has been around since 1979. Led by longtime members Angelo Moore (vocals, sax and percussion) and John Norwood (bass and vocals) led the band through just about an hour set. Moore was back and forth getting the crowd pumped up with songs “I like To Hide Behind my Glasses and “Everyday Sunshine.” With the latter,  Moore went out into the crowd and got them to repeat the chorus. They set the mood for what was to come next.

George Clinton’s Parliament-Funkadelic took the long road to the stage. Various members were already on stage, some joined in playing some chords until Clinton and his entourage soon joined them. Clinton’s shows were always very futuristic even way back in the early 70’s. He was always pushing the envelope and seemed to be way head of his time. Fast forward to 2019 and there were anywhere from 10 to 20 people at a given time on stage. Nonetheless, the musical stew he created seemed to go on with very few hitches at best (at the start of the show his mic didn’t work and had to switch). Clinton who now is 77, prefers to let his band to do the heavy lifting as he interjects his vocals when needed. “Get Low” was a crowd favorite as the band directed everyone to get low to feel the funk.

The near 2-hour set had everyone lots of attendees moving to the groove the entire time. Clinton has stated that this would be his last tour. If so, he definitely “funked” the hell out of WNY for an appropriate send off party!

Get Off Your Ass and Jam (Funkadelic cover)

One Nation Under Groove (Funkadelic cover)

My Mama Told Me