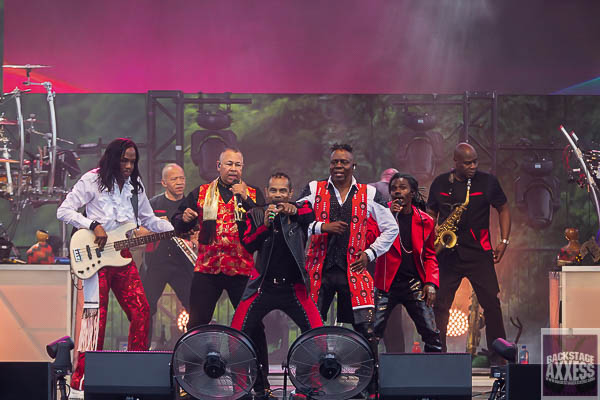 The anticipation was high before Earth, Wind and Fire took the stage this past Tuesday Tuesday at Artpark in Lewiston NY. The overflow crowd was buzzing with the energy of a beehive as the band took the stage to “Sing A Song.” Right from the first notes, the crowd was on its feet dancing in the aisles. You knew it was going to be an night of epic proportions. Earth, Wind and Fire has amassed a number of hits through the 1970’s and 80’s. The next three songs were the start of a string of hits that would keep the  crowd dancing and happy. “Shining Star,” “Getaway,” and “Jupiter” all featured original members bassist Verdine White, vocalists Philip Bailey and Ralph Johnson taking turns in the spotlight. Bailey,  led the group with a cool confidence that 50 years in the music business will bring. Ever the showman, Bailey Sr. still can hit the high notes in his pure falsetto with what seems like little effort for a 68 year old singer. It also should be mentioned that his son Philip Bailey Jr is also in the band and provided lush vocal sounds as well. Remembering founder Maurice White, Bailey Sr. started “Kalimba Story” in the solo spotlight. He was joined by the remaining band members, which then elevated the show to a bit of a gospel celebration.
The middle portion of the show took on a spiritual tone with the songs “Devotion” and “Head to the Sky.” Both songs featured Bailey’s falsetto voice in perfect form. The supporting band members hit every note duplicating the sound of the original recordings. The show was about to kick into high gear with the big hit “Reasons” followed by a series of dance hits beginning with “Fantasy” and the crowd favorite “Boogie Wonderland.” The energy and dancing continued with “Let’s Groove” and quite possibly their biggest hit in “September.”  The crowd would not let them go and the band came back with the high paced encore of “In The Stone.”
This was a magical night for all in attendance. It was a trip back to youthful days of beautiful music, dancing and fun. All that great music, with such a positive message, will stay with everyone who attended this show. For some of us, that happy feeling never left!

Sing a Song
Shining Star
Getaway
Jupiter
Serpentine Fire
Evil
Kalimba Story
Got To Get You Into My Life (The Beatles cover)
Head to the Sky
Devotion
Can’t Hide Love
Write a Song
That’s the Way of the World
Brazilian Rhyme
After the Love is Gone
Reasons
Fantasy
Boogie Wonderland
Let’s Groove
September
Encore:
In the Stone
We would like to thank Dave Wedekindt and Maria Hays from Artpark for the credentials to review the show.