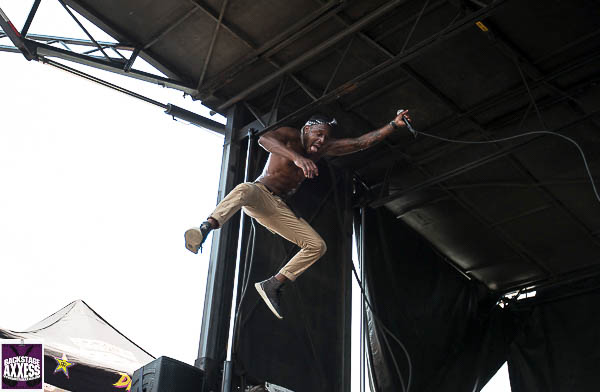 Summer is once again upon us and with the changing of the seasons we can officially kick off this year’s  summer concert season. I always look forward to this time of the year when we music lovers everywhere can experience the great outdoors together at one of the many outdoor venues in the area. The newest festival to hit the circuit is Rockstar Energy’s Disrupt Festival. With the loss of Vans Warped Tour from the Charlotte summer lineup,  fans were looking forward to checking out Disrupt Festival which featured a lot of Warped Tour alumni.

Making a stop in Charlotte, the festival took over the PNC Music Pavilion this past Saturday bringing a host of  bands with a little something for everyone. The format featured two stages, the Festival Stage which was set up in one of the parking lots and  the Main Stage which was under the roof of the main pavilion area. The music got started early with rap-rocker Hyro the Hero kicking off things on the Festival Stage. If you’ve never seen Hyro perform live, put him on your bucket list. He has to be one of the most entertaining artists out there right now and his set was non-stop action from start to finish. Hyro got the crowd going strong early on as he jumped, spun, and made his way all over the stage, taking flight off the speakers on the side of the stage several times during the performance. It was a great way to start the day! Up next, was the many talents of Juliet Simms who is a breath of fresh air whether she’s rocking out with her guitar in hand or filling the venue with her soulful voice. Simms is a gifted singer-songwriter and  the crowd seemed to really be in touch with her music especially her latest song “Bad Love,” which was released just about a week before the festival. If you get the chance to catch her set, don’t miss it. You won’t be disappointed. Keeping the music going was the Australian punk rockers Trophy Eyes before crowd favorite Memphis May Fire took the stage. Led by lead vocalist Matty Mullins, Memphis May Fire had the audience eating out of its hand. Mullins even took time to climb up to the barricade and get closer to the fans up front.  At this point of the day, the sun was beating down on the crowd but that didn’t stop the crowd surfers from  making their way down front. Four Year Strong brought a strong set of pop-punk craziness to the already amped up fans.  Closing out the afternoon of music on the Festival Stage was none other than Sleeping With Sirens.  Frontman Kellen Quinn was all over the stage as the band led the fans through a set which included some old school Sirens to really kick things up a notch.  The day was only half over but Disrupt Festival  had already delivered more than anyo9ne could ask for.

Now it was time to head up to the Main Stage for the metal madness that is Atreyu. I haven’t seen Atreyu live in years and was super stoked to check them out. Of course, they did not disappoint as they took the stage by storm providing the heaviest vibe of the day. The mood lightened up a bit as the pop-punk of The Story So Far led the crowd through a solid set including some songs off their 2018 release “Proper Dose.” During their set,  none other than Anthony Green of Circa Survive was chilling out on top of one of the speakers at the side of the stage. Circa was up next and brought an elaborate lighting system with them to really take the stage show to a new level. The band has songs that really pull on the emotions of the fans and Green took full advantage of this by making his way out to the barricade and singing for the crowd that was eagerly soaking up each and every moment. Their set was over far too quickly and before you know it , it was time for The Used. With a curtain covering the stage and silhouettes outlined, the crowd began to roar until the curtain dropped revealing one of the most popular bands on the tour, The Used. It may seem hard to believe but The Used have been rocking our butts off since their debut album in 2002. Singer Bert McCracken was his usual charismatic and outspoken self, pumping his fists in the air and saying a big “f8ck you” to President Trump and the establishment. There’s certainly never a dull moment when The Used is on stage and their set was incredible , including an elaborated drum riser for drummer Dan Whitesides that lit up all around the bottom and was lowered up and down during the performance and a giant beating heart which was lowered down from the ceiling. Just when you thought it couldn’t possibly get any better, it was time for to cap off the night. Their setup  was simple yet complex, much like their music. The band is technically proficient with lead guitarist Teppei Teranishi mesmerizing the crowd as usual. With a sound that runs the gamut from alt-rock to experimental, Thrice is one of a kind and their performance Saturday night was a perfect ending to a perfect day of music.

It’s unclear at this point whether or not the Disrupt Festival will make its way into the hearts and souls of music fans but it definitely has all the potential. As the years go by, I hope the festival  grows and becomes one of the not to be missed shows of the summer. If you have the chance, be sure to check it out when it hits a city near you.

The Artist in the Ambulance

Under a Killing Moon

Of Dust and Nations

We would like to thank Becky Kovach from Big Picture Media for the credentials to review the show.