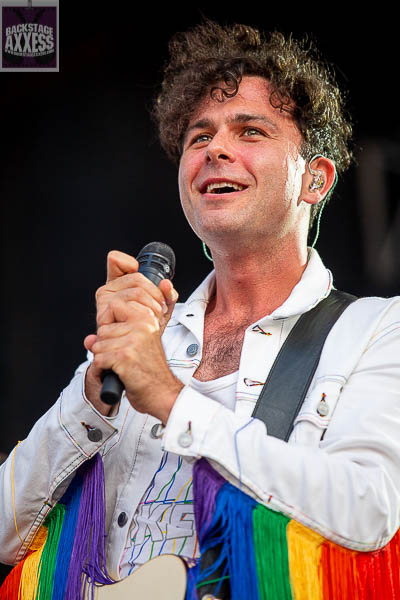 Hamilton ON Canada natives, the Arkells, played Canalside, Buffalo NY last Friday To their usual large crowd. Frontman Max Kerman took the mic and talked to the crowd like an old friend. Thank you’s and praise for the loyal fans that pack every venue they play in the area. No strangers to Western NY,  the Arkells have played her more than a dozen times. The recently played with The Who, opening up for the rock legends just this past May. Their appeal is widespread due to an engaging stage presence and catchy pop sensibility.
Their long set was full of hits and a few covers that enforce their uptempo mindset. An Arkell’s show is not for sitting still. The energy onstage transfers directly to the dancing crowd. Highlights like “People’s Champ” and “Pulling Punches” had the crowd on their feet and moving. The only slower number was the acoustic “Only For A Moment” where Kerman showed a great vocal range. The Party continued with crowd favorites “Private School” and “Leather Jacket.”
They put a nice twist on the encore of Creedence Clearwater Revival’s “Proud Mary.”A different temp gave the song a different look.  The ended their set with possibly their most well known song in “My Heart.”  The Arkell’s exited and promised to be back in the area soon. Judging by the crowd response, they can’t get enough of them and are gaining more and more fans by every additional appearance they make!

Hand Me Downs
Knocking
Kiss Cam
American Screams
People’s Champ
Only For A Moment (Acoustic)
Pulling Punches
Drake’s Dad
Come To Light
And Then Some
Book Club (Request Line)
A Little Rain
Private School
11:11
Saturday Night
Relentless
Leather Jacket
Encore:
Proud Mary (CCR Cover)
My Heart
We would like to thank Paige Gress for the credentials to review the show.