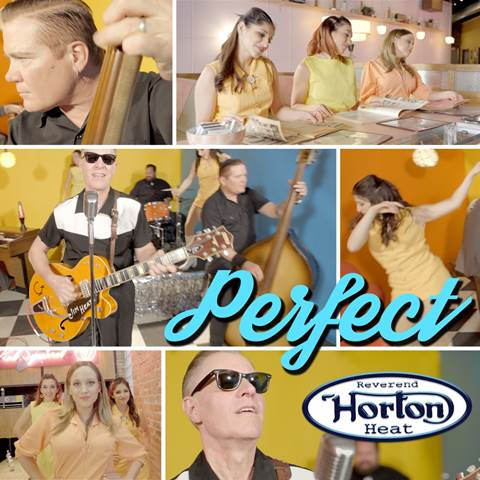 REVEREND HORTON HEAT are crooning back with “Perfect,” the third video from their newest album Whole New Life (available now).

“There will never be another Roy Orbison,” promises frontman/guitarist Jim Heath. “I’ve always thought he was the ultimate perfect singer. There’s a nod to his classic song ‘Pretty Woman’ in here, but this song is my own melody and guitar licks.”

As the first line in the song reads, ‘Perfection is not in the cards,’ Heath, along with bassist Jimbo Wallace accidentally fell into such an imperfect situation in the studio. Technical difficulties forced the band to re-record Wallace’s bass parts when Heath had an idea very unconventional to the REVEREND HORTON HEAT rulebook. “I was thinking about getting Jimbo to play electric bass instead of upright, but he came up with the genius of playing an upright bass with a pick – and it worked out perfect (no pun intended)!”

“I wanted the video to be early sixties go-go themed. The cute dancers we had in the video along with Brian Raida (director) did a great job bringing out that concept, from the set furniture, flooring, lighting and props. I like all of the colors in the video, but I dressed in black and white as a nod to Roy’s video ‘Black and White Night,’ and to contrast the vivid colors. Of course I had to have the sunglasses! We even drank some boozy milkshakes made for us by the owner of the Pink Squirrel in Chicago where part of the video was filmed.”

“Frankly, I think the song is kind of zany and psychotic, verging on ridiculous, but REVEREND HORTON HEAT has always had a sense of humor. At the end of the day, it’s a love song. A somewhat psychotic, yet fun love song.”

Rounded out by drummer RJ Contreras, REVEREND HORTON HEAT are on the road into 2020 supporting Whole New Life. Catch them in a city near you!

“In your face, rip-snortin’, bust out the windows rock and roll” – NO DEPRESSION

“The pace of a race horse gallop and twang of cowboy campfire, a ball-busting, beer-swillin’ rocker – INNOCENT WORDS

“Powerful, cathartic and triumphant return of the godfathers” – HYSTERIA

“The best album of their career” – VOID REPORT

“RHH is the real deal when it comes to psychobilly blues and country” – CLEVELAND.COM