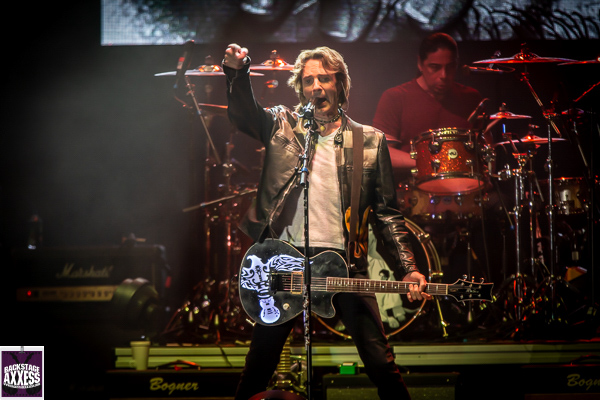 Rick Springfield was everywhere in the 80s. TV shows, music videos, concerts, appearances and movies were some of the ways to see the fan-favorite heart throb. His next birthday will be number 70 and he honestly looks and acts 40 years old. Music has been his long time love and he has continued playing, writing and releasing songs up to the present day. He rolled into Artpark in Lewiston NY last Tuesday and brought his hit parade along to play in front of a very eager crowd. Plenty of men and women of all ages filled the outdoor concert venue wearing 80s garb and personalized t-shirts expressing their feelings about the once teen idol. Some of the messages were very umm…personal. Springfield’s setlist include new and old songs like “Affair Of The Heart” and Don’t Talk To Strangers.”  The stage presence and showmanship are still there even though his voice has become a little strained on the high notes. Springfield knows how to entertain and loves bouncing around the stage pointing to certain crowd members and calling out for audience participation at times. Everyone was expecting “Jessie’s Girl” and he did not disappoint, playing and extended version to close the show. It was certainly a fun time for all. Reliving our youth, if only for a few hours, does make you feel good.

Loverboy and Tommy TuTone opened the show and each played a string of their hits to get the crowd warmed up. By the time Springfield hit the stage, many were beyond warm and ready for a mind trip back into the past