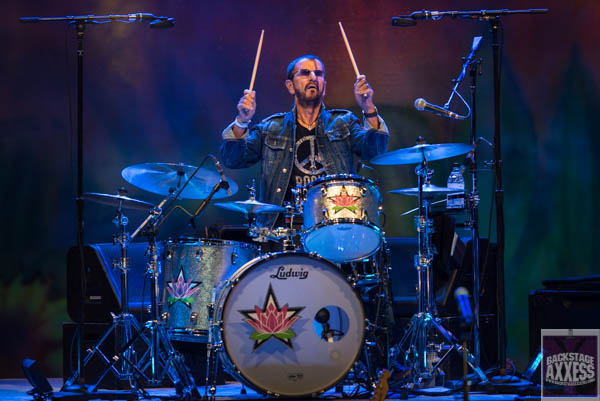 Ringo Starr and His all Star Band kicked off the weekend at Bethel Woods 50th anniversary of Woodstock. They brought with them Blood, Sweat & Tears and the Edgar Winter Band. Both artists played the original festival back in 1969.

First up was Blood, Sweat & Tears. They have a new singer Keith Paluso who joined the band back in May. Paluso was very appreciative of the opportunity and expressed even though it doesn’t matter what you do or how old you are, never give up on your dreams. Even though there aren’t any original members left, the crowd still appreciated the short set that highlighted songs from their original Woodstock set. Those included “Spinning Wheel” and “You Made Me So Very happy.”

Next up was Edgar Winter. Winter originally performed with his brother Johnny at Woodstock in 1969 but unfortunately his brother didn’t live to see the 50th anniversary celebration. Nonetheless, Winter and his band cranked out a 5 song set that included his 2 biggest hits in “Free Ride” and “Frankenstein.” He also dedicated his set to his late brother and performed “Rock and Roll, Hoochie Coo” in his honor.

The Beatles were over in London at Abbey Road studios shooting the iconic image of their Abbey Road album just around the time that Woodstock took place. They were on the verge of breaking up and playing the festival was not an option for a band that stopped playing live since 1966 (outside of one rooftop performance in January of 1969). This time around having a Beatle play the anniversary of Woodstock seemed the right thing to do. Drummer Ringo Starr changed up the all Stars this time around as the band played the iconic Bethel Woods stage.  Alumni Colin Hay (Men at Work) and Hamish Stuart (Average White Band) teamed up with Steve Lukather (Toto), Greg Rolie (Santana and Journey), Gregg Bissonette (David Lee Roth) and Warren ham (Kansas) to give the fans a solid night of musicianship and fun.

With the alumni coming back, the set list was changed up some. Some Men at Work songs along with an Isley Brothers cover called “Work to Do” were dropped in. Stuart did a commendable vocal performance on the latter. Of course, what makes the set fun is Star jokes around with his band and the audience.  At one point he said, “when I joined the Beatles I wrote a lot of songs….most were not recorded”  drew a bunch of laughs.  He asked Lukather what he wanted to play at one point. Lukather responded with some chords of “Day Tripper.” As the crowd got excited, Starr went on to burst their bubble by saying “yeah, we won’t be playing that one.” The band then went into “Yellow Submarine” instead. This kept the crowd happy and they participated in singing along as well. Starr’s vocals sound as good as ever. He still has the chops behind the kit as well.  Star acknowledged the importance of the date and introduced original keyboard player of Santana Gregg Rolie, who did play the original festival. Rolie asked who was here in 1969? A slim response raised their hands. Rolie went on to talk a little about the song as the band went into “Oye Como Va”

I always said you are not going to get a more fun show than a Ringo Starr All Star Band show. This version was just as fun as any other version Starr has put together in the past.

Down Under (Men At Work cover)

Don’t Pass Me By (The Beatles cover)

I Wanna Be Your Man (The Beatles cover)

With a Little Help From My Friends  (The Beatles cover)

We would like to thank Ilana Gold from Bethel Woods for the credentials to review the show.