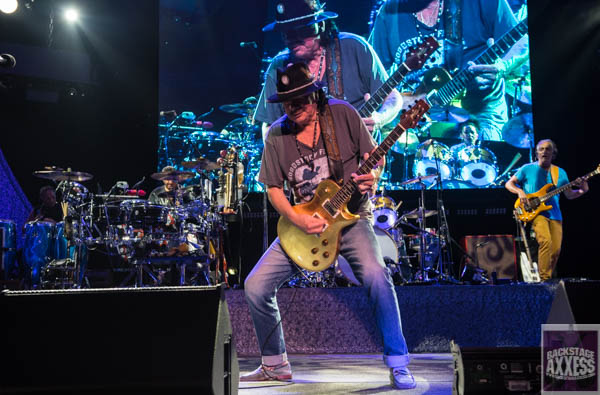 The golden anniversary of Woodstock was celebrated at Bethel Woods this past weekend.  In order to have celebration like this you must have performers who were at the original. Santana was one of those performers who were invited back to play the anniversary weekend.  Santana’s performance back in 1969 was legendary. He catapulted that performance to make him one of the most influential guitar players over that time.  It wouldn’t have been an anniversary weekend without having him there. He brought with him the soothing sounds of soft yacht rock band the Doobie Brothers.

The Doobie Brothers have been around since the early 1970’s and still remain a top drawing classic rock act. Led by the foundation members Tom Johnston, Patrick Simmons and John McFee, the band played about an hour and a half set. Vocals were spread all along various members. McFee showed his talent by playing a fiddle for “Spirit.”  Simmons was all over the stage pointing and shouting throughout.  Of course the band got a huge reception for some of the biggest hits including “Blackwater” when the words were changed to include Woodstock (instead of Mississippi) moon, won’t you keep on shinin’ on me? A solid set was provided by the Doobie’s.

Exactly 50 years and one day, it was Santana coming back to the place where he first made a connection to the musical world. Starting of with  a video of what is known as the “Woodstock Chant,” got the crowd jumping from there and Santana and his band didn’t let them go until the last note of the evening was played of The Youngbloods cover “ Get Together.”

Santana ‘s band has pretty much remained consistent over the last handful of years with the exception of his wife, Cindy Blackman who took over behind the kit a few years back. She is a monster drummer and adds a new rhythm element to the band. She also handled vocals on a interesting cover of John Lennon’s ‘Imagine.” It was set with a different melody and vibe which worked well within the set. Johnston, McFee and Simmons joined Santana for Bob Marley’s “Exodus.”

Make no mistake, this is Santana’s show and his guitar playing is truly the focal point. His precision on tracks like “Jin-go-lo-ba” and “Europa” show how much he is revered as one of the greatest guitar players of all time. His spiritual beliefs flowed into his guitar playing making this show a sacred event.

It wouldn’t be a Woodstock celebration without Santana’s presence. It was a packed crowd and everyone going home feeling like they were witnessing another part of musical history!

Soul Sacrifice (With Light my Fire snippet –cover The Doors)

Put Your Lights On

Breaking Down the Door

Are You Ready (The Chambers Brothers cover)

Get Together (The Youngbloods cover)

We would like to thank Ilana Gold from Bethel Woods for the credentials to review the show.