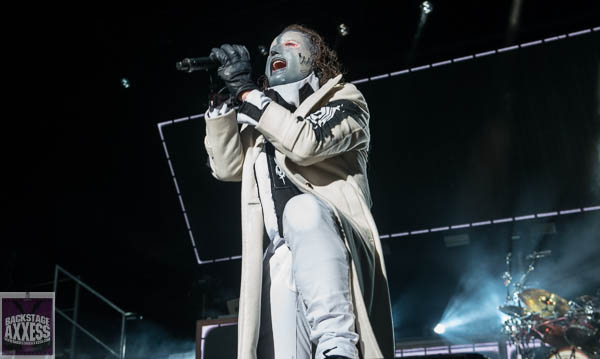 The metal package of the summer steamrolled its way through the WNY are this past Sunday. Slipknot who is not only celebrating two decades in metal music, but also the release of its 6th studio effort titled ‘We Are Not Your Kind.” Slipknot’s Knotfest brought out 3 other bands to cover various areas of the metal genre which included Volbeat, Gojira and Behemoth.

First up was Behemoth. The extreme metal band from Poland is also getting ready to release a new EP titled “O Penatgram Ignis.”   Led by rhythm guitarist & vocalist Nergal, this band have the same outfit since 2004 when lead guitarist Seth joined the band. Their hard pounding set includes various outfit changes and themes by Nergal. Their 7-song set include the most pyro I have ever seen used by an opener. It compared to many headliner sets. They set the mood for what as to come.

Next up was France’s Gojira. Gojira is a rising band amongst the metal community over the least handful of year’s. Opening up a few years ago for Metallica will sure get you a lot of notoriety. Its been over 3 years since “Magma” was released. Nonetheless, Gojira upped the stakes as they had a huge crowd for their set and the band took notice. They thanked them for coming early and watching the band perform their 40-minute flawless set.

Danish rockers Volbeat were up next. They just released their latest album earlier this month called “Rewind, Replay and Rebound.”  Led by the charismatic Michael Poulson, the band included 2 news “Last Day Under The Sun” and “The Everlasting.” The songs sound like true Volbeat classics. With lead guitarist Rob Caggiano now entrenched in the band for the last 6 plus years, he gives Volbeat more punch and a fuller sound. It comes through even more in a live setting.

Headliner Slipknot took the stage at 9:15pm and gave the fans every ounce of energy for an hour and 30m minute set. Led by vocalist Corey Taylor, the band were all dressed in white, some included new masks and some still had the old traditional ones. The hard driving “People=Shit” got things started and got the Darien Lake crowd very crazy. This continued and came to a peak when Taylor got the crowd to answer him after he said If “you’re 555,” the crowd would erupt and proclaim, “then I’m 666.” This was for the tune “The Heretic Anthem.” You ever wonder what would happen if the band can control the crowd with just simple commands? Well, during “Spit It Out,” Taylor did just that as he had just about the entire crowd of 13,500 plus get down on their knees at his command until he yelled jump.  It was an insane scene.

The controlled chaos that is a Slipknot show was one of the tightest musical shows I seen this year. Even with the recent lineup changes (longtime member Chris Fehn leaving earlier this year), the band continues to power through and remain a musical force!

The Devil in I

We would like to than Tim Kohan from Livenation for the photo pass to photograph the show.