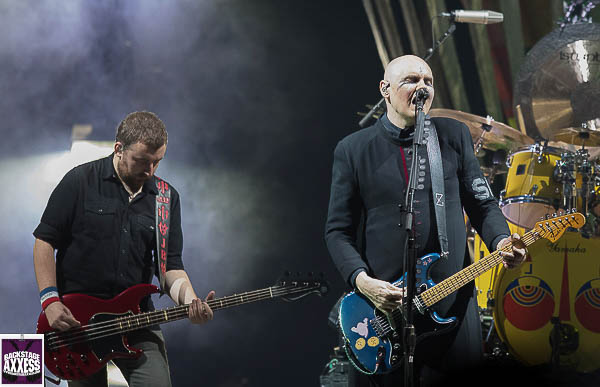 It was a lineup that alternative rock fans everywhere had been waiting for. The summer tour featuring 90’s rock favorites the Smashing Pumpkins was coming to town along with Noel Gallagher’s High Flying Birds and A.F.I.  The Pumpkins were a staple of rock radio in the 90’s and really broke into commercial success with their third studio album “Mellon Colie and the Infinite Sadness” in 1995. The 28 track double album was an ambitious move that spawned five hit singles and cemented the band firmly on top.  With over 30 million album sold and a plethora of awards including an American Music Award for Best Alternative Artists,  several Grammy Awards, and MTV music video awards, the Smashing Pumpkins are now alt-rock legends and this summer they would show off their chops to audiences across the United States.

Opening up the evening’s festivities, was the alternative rock of A.F.I. Many people attending the show weren’t even aware that this band was on the bill so for many, it was a pleasant surprise.  Led by lead vocalist Davey Havok, A.F.I. brought a ton of energy to the hot, humid, and stormy summer night. The rhythm section of drummer Adam Carson and bassist Hunter Burgan were spot on and guitarist Jade Puget put on a blistering attack.  But, it was definitely Havok who stole the show, spinning and jumping all over the stage as he swung his microphone around.  This was my first time seeing A.F.I. perform and I thoroughly enjoyed it. If you’re catching this tour, get their early enough to check them out.

Next up was Noel Gallagher’s High Flying Birds and I don’t think anybody in the audience knew quite what to expect. Noel of course is one half of what used to be the rock band Oasis whose break up brought drama between Noel and his brother Liam over the years.  Noel was the lead guitarist and songwriter for Oasis and brought some of his former Oasis bandmates together to form the High Flying Birds. Taking his spot at the microphone, Noel’s vocals resonated across the venue backed by his very talented band. His set included songs from the High Flying Birds as well as a few Oasis hits including “Wonderwall” and “Don’t Look Back In Anger” which had the crowd on their feet roaring their approval. A cover of The Beatles’ classic “All You Need Is Love” closed things out. It was a stellar performance by one of the greats and it will be fun watching what comes next for Noel Gallagher.

The main event of course was the Smashing Pumpkins and the fans were primed and ready to see their favorite band hit the stage. As the venue lights went out, the stage lit up as three giant toy dolls inflated on the stage. The band began to take their spots with frontman Billy Corgan making his way out behind his microphone as a taped version of Handel’s “Sarabande” played. Corgan was a striking figure clad in his long black robe looking both majestic and sinister at the same time. Joining him were drummer Jimmy Chamberlin, guitarist James Iha, and guitarist Jeff Schroeder as the band kicked off their set with “Today.” From that point on, it was a Pumpkins greatest hits festival as the band delved into their catalog giving the fans exactly what they wanted. Corgan sounded on point and the band never missed a beat. The crowd was treated to a dazzling display of lights and lasers throughout the set with the giant toy dolls turning at one point to reveal a different side of them. A surprise inclusion in the set was a cover of “Fire and Rain” by James Taylor; after which Corgan introduced the band members.  The chit chat was kept to a minimum which was probably a good thing because Corgan referred to Charlotte as Charlottesville more than once. No one seemed to mind though as they were too caught up in the sonic delights that were put forth for them.  The Smashing Pumpkins put on a hell of a show which was appreciated by fans both young and old.  This was one of the hottest tickets of the summer season and for good reason, the Pumpkins smashed it and the Charlotte crowd loved every minute of it.

We would like to thank Kim Shiver from Livenation for the credentials to review the show.