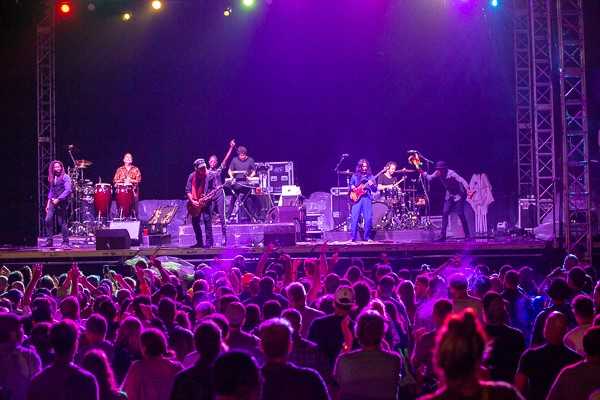 Mother Nature was not kind to fans of The Thievery Corporation last Tuesday at Artpark in Lewiston NY. Threatening weather and frequent rainstorms were in the area causing a near two-hour delay for their show at the outdoor venue. Patience was the word of the day as the skies cleared and the band finally took the stage at around 9pm.

A shortened setlist was assembled and the night began with a small Overture which led to Puma Ptah taking the mic for “The True Sons of Zion” to open the show. The Thievery Corporation’s live show brings out a troupe of musicians and singers to perform a blend of reggae, soul, hip hop, funk and Indian music. Each singer brings his own flavor and the mix is quite wonderful. Fans were dancing and swaying to a expert rhythm section and DJ back beat as each vocalist took their turn in the spotlight. Loulou Ghelichkahani sang in French on “Voyage Libre” then Raquel Jones sang lead on “Letter to the Editor.” Mr. Lif was up next with “Culture of Fear.” Natalia Clavier performed “Until the Morning” and percussionist Frank Orrall chimed in with “Heart is a Hunter.” The numerous collaborators evolve their sound into a trans-genre mix that produces a show within a show. Each style different from each other but blended into a cohesive sound. Finishing the shortened show with a full stage of all the performers on “Warning Shots” left the crowd chanting for more.

With no time left the band could only bid farewell and thank everyone for braving the elements and staying. Those that left early missed an inspired performance. Let’s hope they return to the area soon for a full version of the show.

Setlist:
Opening Medley
True Sons of Zion
Voyage Libre
Letter To The Editor
Culture Of Fear
Illumination
Until The Morning
Take My Soul
History
Lebanese Blonde
Amerimacka
Heart Is Hunter
Warning Shots
We would like to thank Dave Wedekindt and Maria Hays from Artpark for the credentials to review the show.