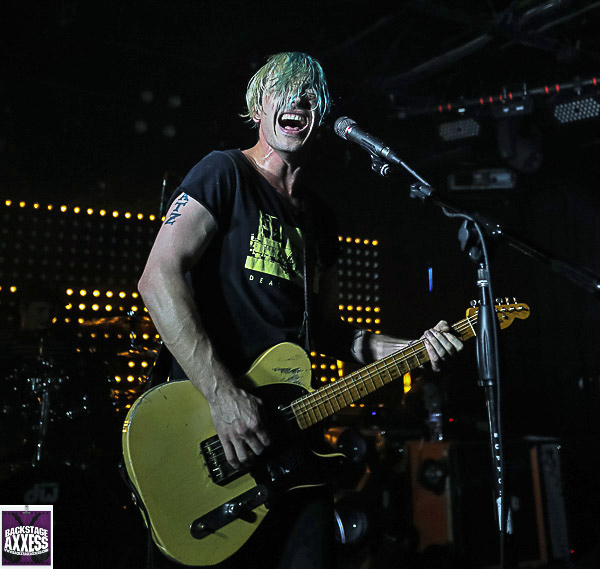 One of the hottest bands making a splash on the rock scene right now is Badflower.  The band has been around since their formation in 2008 when two music school students, Josh Katz and Joey Morrow, met in Hollywood and began making music together in a group they called the Cartunes. After releasing a self-produced EP in 2011, they lost a few members and recruited Alex Espiritu and Anthony Sorettireformed and changed their name to Badflower. Their 2016 “Temper” EP made music fans stand up and take notice and with the release of their first full length studio album earlier this year, “OK, I’m Sick,” Badflower has taken things to an entirely new level. The band has stayed busy touring and garnered legions of new fans playing huge rock festivals like Epicenter Festival and Welcome To Rockville. The band is currently out on a headline run promoting the new record and made a stop Friday night at the Underground in Charlotte.

Before the band took the stage, the lights dimmed and you could hear a recording of what seemed to be a porno or people engaged in sexual activity over the speakers. The LED screen at the rear of the stage lit up with a text message reading my mom caught me masturbating giving everyone a chuckle before Badflower dashed on to the stage and kicked things off with “Wide Eyes.”  The members of the band are all gifted and skilled musicians. Drummer Anthony Sonetti  drove a solid pace as bass guitarist Alex Espiritu slapped his bass as he slid, ran, and jumped all night long.  Guitarist Joey Morrow is second to none as he let his fingers do the talking throughout the set. Frontman Josh Katz is truly in a league of his own. Not only are his vocals terrific, but he is a master showman and shaping up to be quite the rock god in the not so distant future. He appeared on the stage in a big, fuzzy faux-fur coat and sunglasses as he bent, stretched, and led the band through a stellar set.  A dazzling light show accompanied the music ranging from dark reds to almost black with flashes of light to a beautiful bevy of rainbow colors depending on the song.  Katz told the crowd he was suffering from the flu and urged everyone to take a bunch of vitamin c when they got home, but you would never have guessed it from the performance. His vocals shined on tracks like “Move Me” and a crowd sing-along of the Oasis song “Champagne Supernova,” which was combined with “Mother Mary.” They even threw in a cover of “Bury a Friend” from Billie Eilish.  The sell out crowd was having a great time and nobody wanted the night to end.  Before the band closed their normal set with “Girlfriend,” Katz explained to the audience that he wanted to take a video of them shouting “One More Song!” as he danced foolishly on stage. Of course, the shouts began in earnest and Badflower returned for a three song encore to cap off an incredible evening of rock and roll.

This is a tour that will not disappoint so don’t miss your chance to check them out when they roll into a city near you.

We would like to thank Mackenzie Pepper from BMLG for the credentials to review the show.