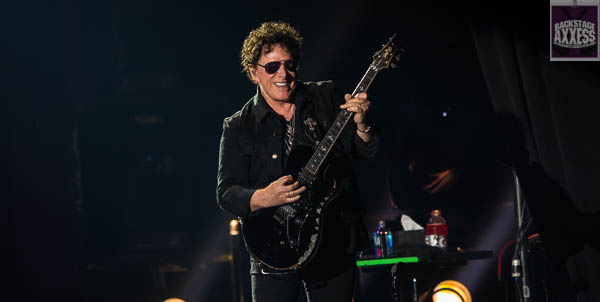 The members of Journey have decided not to do a full major tour in 2019 as some members enjoyed the downtime. Some (like Neal Schon) enjoyed side projects like Neal Schon’s Journey Through Time that took place earlier this year. Fast forward as Journey is just about to embark on a Las Vegas residency at the Colesseum at Caesars next week. Before that takes place the band decided to do a few warm updates in some elect cities. One of the lucky cities was Niagara Falls on the New York side. The Seneca Niagara Casino hosted the Rock and Roll Hall of Famers for an intimate performance this past Wednesday night. Its also rare the venue holds any shows outside of their traditional Friday through Sunday slots. This is the third that I can remember that was held Monday through Thursday (Heart and Kid Rock being the others). This just showed the magnitude of having a show like this during mid week.

Taking the stage at 8:15pm, the band didn’t hold up as they went right into one of their most powerful tracks in “Separate Ways (Worlds Apart).” The band still consists mostly of the iconic 80’s lineup which was Steve Smith on drums, Ross Valory on bass, Johnathan Cain on keyboards & piano and Neal Schon on lead guitar. The only change has been Arnel Pineda who has now been the vocalist for the band for the last 11 years. On vocals, Pineda’s holds his own and then some. His vocals mimic those of former vocalist Steve Perry that you can’t help but only appreciate. If you listen to songs like “Be Good to Yourself” or “Open Arms,” you may envision Perry even though you are watching Pineda.

Schon has always been one of the most underrated guitarists in my opinion. He never gets the accolades he deserves. He is constantly trying to expand his musical horizons by releasing new solo material or teaming up with other artists on side projects (like the one  mentioned earlier). I believe that fire still drives him to put 100% percent into Journey when they reconvene to do these nostalgia-like shows & tours. He provided not one but two guitar solos for the audience.

Cain was back and forth between the piano and the electric guitar all evening. He described how he wrote “Faithfully” back in 1981. He then dedicated it to the fans in the audience for being so supportive to the band throughout the years.

If you never seen Journey since they ruled the airwaves of the 80’s, they are more than Perry’s memorizing vocals. Their cohesiveness musically and their ability to continue to deliver solid musical performances are what matters to the fans. They are still playing sheds and and arenas so being able to catch them in the 2,200 seat events center was a treat for all who attended!

Be Good to Yourself

Any Way You Want It

Anyway You Want It