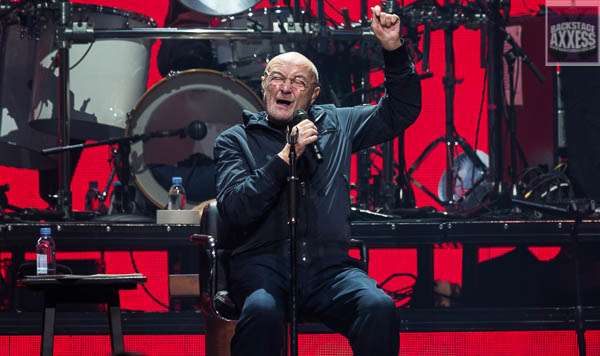 The appropriately titled “Not Dead Yet” is the current moniker that Rock and Roll Hall of Famer Phil Collins is touring under. You couldn’t have a title more fitting title after watching Collins perform for about 2 hours and 15 minutes before a sold out crowd in Buffalo last Friday night. Collins who has multiple physical ailments that prevent him from not only performing on the drums and piano, but from walking normally. He needed the aid of the cane to walk to and from the stage and performed the majority of the set from his chair.

Collins started off addressing the crowd thanking them for showing up as they had many choices to spend their Friday night and was appreciated that they decided to spend it with them.  It was an interested choice to open up the set with the dreary “Against All Odds” but the fans seemed to appreciate it. It was a huge song for Collins even garnering him a Grammy Nomination, but felt a more uplifting number would have been more appropriate in the opening slot. Collins had a 14 piece backing band that included 4 on horns, 4 on backing vocals, a percussionist, drummer, bassist, keyboardist  and 2 guitarists. Included in that ensemble was his longtime friend of 55 years Ronnie Caryl on acoustic guitar. He also had his longtime solo and Genesis partner Daryl Stuemer along on the electric guitar. Most importantly in this group of musicians was Phil Collins’s son Nicholas Collins. Nicholas was very impressive not only behind the kit but he also played the piano on a song off of his dad’s album ‘Face Value’ called “Dance Into the Light.”   What made this more touching was his dad actually stood by the piano and sang without his cane and delivered the song with elegance and beauty. A hug ensued after the song and it was met with a standing ovation. It was one of the highlights of the evening for sure. I will say that it seemed that Collin’s voice got stronger as the evening wore on.

The set was more focused on Phil’s solo career but he did do 3 Genesis songs.  “Follow You Follow Me” was the highlight of those 3 songs as a video montage of various clips with Genesis since the early 1970’s were shown as Collins sang the song. It was nice tribute and retrospect of his career with the band. Another highlight was Collins’ vocal on “In the Air Tonight.”  It showcased his perfectly tone vocal pitch throughout the song even when it built up to the crescendo. His son even nailed all the drum parts with preciousness as well.

At one point he sang the Stephen Bishop cover “Separate Lives” with backup vocalist Bridgette Bryant. The lights dimmed and only lights depicting stars were the backdrop for the song. for “Sussido,” a few confetti guns shot off dousing the fans towards the end of the set.

I must admit, Phil Collins delivered in many ways as I didn’t know what to expect. He didn’t let his physical limitations hinder his performance one bit. I for one, have never seen him live so it was treat to see him.  Phil Collins was charismatic, proud and delivered a high quality show. If this was his last go around, many fans can say they that at least he went out on high note!

Against All Odds (Take a Look at Me Now)

Another Day in Paradise

Throwing it All Away (Genesis song)

Who Said I Would

Something Happened on the Way to Heaven

You Know What I Mean

In the Air Tonight

Dance Into the Light