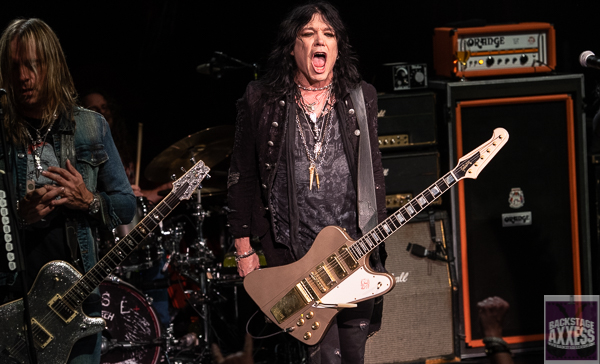 On tour in support of his latest CD “Rise,” Tom Kiefer and his solo band played the intimate Bears Den (Inside the Seneca Niagara Casino) this past Friday night in Niagara Falls, NY. Its been 6 years since the release of his first solo record “The Way Life Goes” but this latest record and tour was something different. The Tom Keifer band includes Tony Higbee on guitar, Billy Mercer on bass, Kendra Chantelle on backup vocals, Jarred Pope on drums, Kory Myers on keyboards and Tom’s wife Savannah on backup vocals. He has been locked in with the same bad for a handful of years now which gives him the comfort level as a performer to push the boundaries a little. You saw some of that at the Bears Den show.

The band started the performance off with its latest single “Touching the Divine.” The track has an old school rock type of feel that would remind you of Tom’s former band Cinderella some. After banging out a few classic Cinderella tracks, the band went into the first single and title track “Rise.” The song included Keifer on slide guitar and the song built up to a crescendo where it was one of the highlights of the  show. The show was heavy on Cinderella classics, which satisfied die hard Keifer fans’ appetites. Keifer came out into the audience twice. One was during “Nobody’s Fool” and the second was for “Shake Me.” For “Don’t Know What You Got (Till It’s Gone), Savannah Keifer took over the piano half way during the song so Keifer was sable to finish the song on guitar.  Higbee was spot on with his background vocals and his guitar playing. Both Keifer and Higbee played off each other so fluidly.

This was a complete show. You had a band that delivered on all aspects. Tom Keifer has always been a passionate performer.  With Tom Keifer leading the way you can always count on him giving 100%.  This show was no different. The sold out crowd went away with a satisfying feeling of seeing one of the best shows of the year!

Somebody Save Me (Cinderella song)

Don’t Know What You Got (Till It’s Gone)

We would like to thank Amanda Cagan from ABC Public Relations for the credentials to review the show.