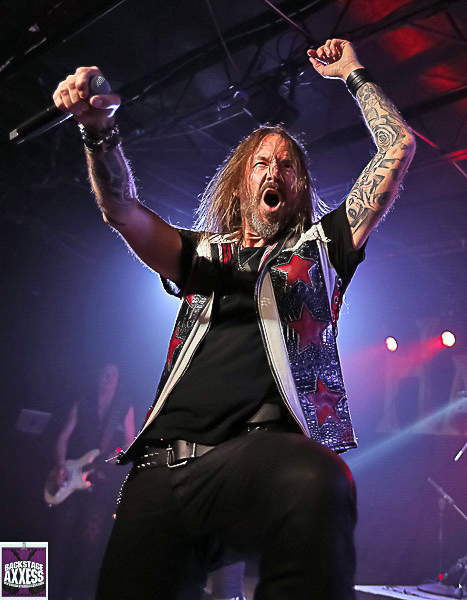 HammerFall, the band that made “Sweden Rock,”  made their first appearance ever  in the Charlotte area this past Monday night as the Swedish heavy metal heavyweights made a stop at the Underground. HammerFall has been on the road in support of their newest release and eleventh studio album “Dominion,” and came ready to make Charlotte rock.

There was no opening band on this particular night, so metal fans were treated to a full set from the one and only HammerFall.  Hailing from Gothenburg, Sweden,  the band has been making music since their inception in 1993 bringing a classic European melodic metal sound with them.  Drummer David Walling was the first to hit the stage, taking his place behind his kit, sticks crossed high in the air as the crowd erupted. The rest of the band came out one by one flashing a fist in the air and a devil horn salute to the crowd before launching into the first song of the night, “Never Forgive, Never Forget.” Frontman Joacim Cans sounded great as he led the band through crowd favorites both new and old.  The band was technically fantastic with Walling and bass guitarist Fredrik Larsson driving the pace and guitarists Oscar Dronjak and Pontus Norgren letting it rip. Along with terrific songs and great musicianship, was a top notch stage presence. The band members seemed to be natural showmen, spinning their hair, posing with their instruments, and getting the crowd excited and amped up all night long.  Cans took a moment to point out the birthday boy in the audience who was celebrating his 50th birthday and joked that he would sing Happy Birthday, but he didn’t know that one. Dronjak was especially interactive holding his guitar above his head and at one point executing a cat-like back stretch as he used his tongue on the fretboard of his guitar. The crowd was having a great time and the band was fun to watch as they tore through song after song.  One of the highlights of the night was “Let the Hammer Fall” which had Dronjak using his iconic hammer guitar followed by the fantastic anthem “Hammer High” which had everyone’s fists in the air chanting the chorus. I even saw a few replica hammers in the audience as well.

Nobody wanted the night to end and neither did HammerFall as they returned for a three song encore including the powerful anthem “(We Make) Sweden Rock” and the closer of the night, the melodic blast of ‘Hearts on Fire.”  This was my first time seeing HammerFall live and I hope it won’t be the last. It was hands down one of the most entertaining shows of the year. If you’re a fan of rock and metal, you’ll definitely want to check them out when they make your city rock so be sure to be there when the hammer falls!

One Against the World

Riders of the Storm

We would like to thank Jon Freeman of Freeman Promotions for the credentials to review the show.