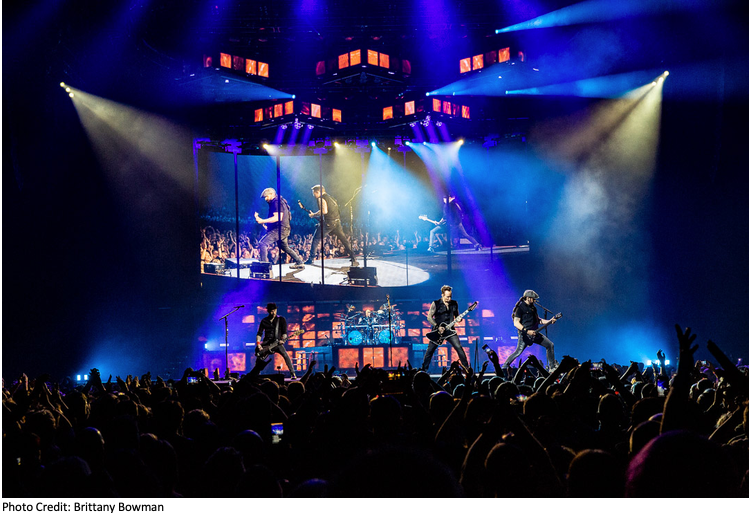 SPECIAL GUESTS CLUTCH AND THE PICTUREBOOKS TO SUPPORT

Today, multi-platinum Danish rock band Volbeat confirm 15 U.S. headlining dates on their  “Rewind, Replay, Rebound World Tour” this April and May, bringing the tour to cities including Las Vegas, Nashville, Atlanta, Baltimore, and New York City (full dates below). Special guests Clutch will be direct support on all dates, with the exception of the May 2nd Hershey, PA show which will feature direct support from Gojira. The Picturebooks will open each night on this tour. Ticket pre-sales begin Tuesday, January 14th and general on-sales begin Friday, January 17 at 10am local time here. A limited number of VIP packages will also be available for purchase and include meet & greet and photo opps, exclusive merch items and priority check in with early entry to the show and early access to merch.

The band has previously announced European festival and headline appearances coming in June and July, following their sold-out 2019 European run. Tickets and more information about these dates are available here.

“We can’t wait to get back to the States and bring a full, headline-length Volbeat show to our U.S. fans,” said the band, “and we’re beyond ecstatic to have our great friends in Clutch and our new friends in The Picturebooks joining us for the ride. We will see you very, very soon!”

Additionally, the band will be headlining 98 KUPD’s UFEST 2020 April 4th at Big Surf in Tempe, AZ and will appear at FM99 WNOR’s Lunatic Luau alongside Disturbed on May 1st at Veterans United Home Loans Amphitheater in Virginia Beach. Tickets for both shows go on sale on Friday, January 17. Check volbeat.dk for details.

The band’s seventh studio album Rewind, Replay, Rebound is out now. For the album, Volbeat— Michael Poulsen (guitars/vocals), Rob Caggiano (guitars), Kaspar Boye Larsen (bass), and Jon Larsen (drums) —build upon the distinct, psychobilly, punk-tinged rock ‘n’ roll sound they are known for, while reaching for new creative summits. “The whole point for us going into the studio, is because you still have something to prove — not just for the fans, but mostly for yourself,” says Poulsen. “We would not be able to do this record if it wasn’t for the work we have done in the past. No matter how old the band gets or how many records we do, there is always going to be that signature sound.” Rewind, Replay, Rebound is available on all formats here, including a 2 CD deluxe edition, a special deluxe edition box set, and transparent and blue colored vinyl, numbered and limited to 1,000 copies each.

Rewind, Replay, Rebound was produced by long-time collaborator Jacob Hansen and co-produced by Rob Caggiano and Michael Poulsen. This marks the first studio album with Kaspar Boye Larsen on bass. To achieve the album’s sound the band also drew upon a myriad of guests including backing vocalist Mia Maja and the Harlem Gospel Choir, who both return after appearing on 2016’s Seal The Deal & Let’s Boogie. Ultimately, Volbeat have not lost their passion to create and progress. It’s that which keeps them hungry — and musically honest on the new album.

VOLBEAT emerged from Copenhagen in 2001. Since then, they’ve tirelessly clawed their way to hard rock’s upper echelon with endless touring, including opening for Metallica, Motorhead and Slipknot, and a string of six beloved full-length albums. Their 2010 album Beyond Hell/Above Heaven, which features hit singles “A Warrior’s Call” and “Heaven Nor Hell,” has received RIAA Gold Certification. 2013’s Outlaw Gentlemen & Shady Ladies, which includes the Grammy nominated “Room 24,” bowed at #9 on the Billboard Top 200 upon release, marking the highest U.S. chart entry for a Danish act since 1997. A distinction that Volbeat topped in 2016 when Seal The Deal & Let’s Boogie debuted at #4. The band also released Let’s Boogie! Live At Telia Parken, a concert film and album documenting their landmark 2017 Copenhagen show in front of 48,250 fans, the largest show a Danish band has ever performed in Denmark.