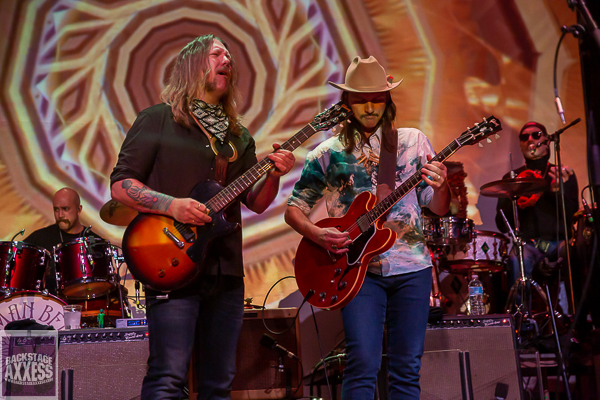 The Allman-Betts Band rolled into the Town Ballroom in Buffalo, NY last Wednesday in support of their debut album, “Down To The River.” The children of The Allman Brothers Band members carry on their legacy. Devon Allman (son of Gregg), Duane Betts (son of Dickey) and Berry Duane Oakley (son of Berry Oakley) met in 1989 on an Allman Brothers tour but did not come together until 2019. The collaboration of the 3 sons of founding members of the Allman Brothers is a challenge that has been met with a nod to the past and a step into the future. The old saying, “Listen to your parents!” has a multi-level meaning in the case of The Allman Brothers Band (ABB). Devon, Duane, and Berry have superstar parents. Unlike many children in their situation, these boys have embraced the legacy of their past and forged a new direction in the musical style of their namesakes.  They could have driven the easy road and become an Allman Brothers cover band. They chose to honor their parents and continue making original music that would carry on the sound of their family tradition.

The room was near capacity as the ABB took the stage and launched into a four song block of songs from their first album. Notable was the way the band members connected with each other musically. Betts picked up his Les Paul and channeled his father in style and appearance. Allman’s voice echoed his father with a younger, more powerful tone.

When the band launched into “Ain’t Wastin’ No Time” the crowd erupted into cheers. This is what they came to hear. “Blue Sky” followed and Betts unique voice on lead vocal was right on. If you closed your eyes it felt like you just broke the seal on “Eat A Peach” fifty years ago. Johnny Stachela had the Duane Allman guitar style down pat as his slide moved across his Gibson SG’s fretboard.  The night continued with more selections from “Down To The River.” On “Good Ol’ Days,” a long, mellow blues song, Allman and Betts traded solos and vocals in perfect rhythm as Oakley provided the steady back beat. “Jessica” led to another round of cheers as Betts took over the stage and left no doubt as to his guitar talent. The title track, “Down To The River” had Allman on an emotional lead vocal that brought the biggest applause of the night. The encore of another ABB original, “Long Gone” left the crowd with that happy feeling you get when you know you just experienced greatness.

ABB has a new sound with deep roots in southern rock. This line up has all the makings of a new “supergroup.” Hear this, good things come when you listen to your parents.

Down To the River

We would like to thank Emily Ginsberg from Big Hassle Media for the credentials to review the show.