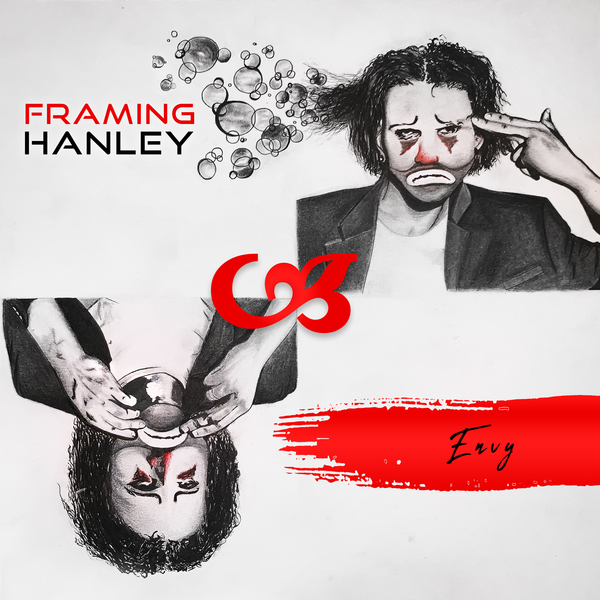 FRAMING HANLEY
RELEASE FIRST  ALBUM IN 6 YEARS
“ENVY” OUT NOW!
Friday, February 21st, 2020 – Framing Hanley released their 4th studio album Envy via Thermal Entertainment  today.
Stream, download or purchase CDs through this link: https://ffm.to/framinghanleyenvy
“If you would have asked me when we started back in 2007 ‘what do you envision as your sound 12 years from now’,” states vocalist Kenneth Nixon. “I certainly wouldn’t have predicted this — but holy hell am I excited about the evolution in this band’s music. We spent 3 years working on this album and it is undoubtedly the very best of Framing Hanley from start to finish. We needed a break in 2015 — but we’re back now, and we’re firing on all cylinders.”
Envy Track Listing:
1) Say You Ever
2) Bubbles
3) Misery
4) Joke’s On Us
5) Forgiveness Is An Art
6) Puzzle Pieces
7) Maeve
8) Carousel
9) The Way Down
10) Throwing Knives
11) Counterfeit
12) Baggage Claim
Framing Hanley had released three albums prior to breaking up in 2015. The Moment (2007), A Promise To Burn (2010) and The Sum Of Who We Are (2014) has sold over 200,000 albums, 1.5 million downloads and music has been streamed over 150 million times.  Official music videos have surpassed 40 million views.  Radio hits included Hear Me Now, Lollipop, You Stupid Girl, Collide and Criminal.  The band had toured coast-to-coast in North America and has had several successful European and Australian tours.
Follow Framing Hanley on social media:
Facebook: www.facebook.com/framinghanley
Instagram: www.instagram.com/framinghanley
Twitter: www.twitter.com/framinghanley
YouTube: https://www.youtube.com/framinghanley