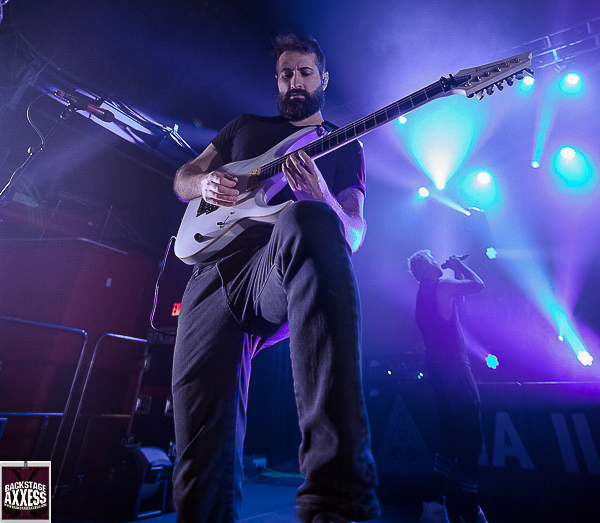 Friday night was Valentine’s Day and what better way for metalheads to celebrate their love for each other than by attending a show.  As it happens, American metal band Periphery was in town at The Fillmore for a Charlotte stop on their Hail Stan 2020 U.S. Tour.  Periphery is not your average metal band, in fact, the very definition of their name refers to the outer limits of an area or in this case a genre.  Since their inception in 2005, Periphery has been perfecting their craft, which in this case is progressive metal or more accurately, djent. The band is one of the true pioneers of the djent movement which is known for high gain, lots of palm-muting, distortion, and extended range tunings utilizing six, seven, and even eight-string guitars. Periphery has been on the cutting edge musically as well as technically going back to their 2010 self-titled debut and shows no signs of slowing down.  Their latest record, 2019’s “Periphery IV: Hail Stan,” just may be the best they’ve ever done and the crowd at the Fillmore was primed and ready to experience it live.

The stage was awash in dark blues with drummer Matt Halpern’s kit on a riser center-rear stage with side risers emblazoned on one side with “HAIL” and the other of course with “STAN.” Matt was the first one to take the stage as the rest of the band came out, fists in the air to greet the crowd and dove right into “Reptile” off of their latest record.  Noticeably missing from the stage was guitarist Mark Holcomb who is sitting out this tour due to an undisclosed family matter, so the band was playing as a four-piece unit.  The strobes were flashing on and off and the stage would go from total darkness to saturated with light as Periphery put on a master class in prog-metal techniques.  It is easy to be mesmerized by the guitar work of Misha Mansoor and Jake Bowen, thinking to yourself how do they do it and appreciating the complexity of the music itself. They even brought out some of the members of support act Plini to lend a hand at the end of “Reptile.”  Lead vocalist Spencer Sotelo started the night out in fine form but was suffering from the ill effects of our mild Charlotte winter as he mentioned how bad the allergies were here. The band got a huge reaction when they went back to “Periphery II” for the song “Scarlet” which brought out a sea of crowd surfers. One after the other made their way to the barricade, one lucky fan holding his Periphery drum head in his hand as he got the ultimate fist bump from Sotelo.  I found it easy to get lost in the music and just stood back for awhile taking it all in. Unfortunately, Sotelo’s vocal issues were getting worse as the set went on and he announced to the crowd that he wouldn’t be able to finish out the night or he would risk having to cancel the whole tour. Losing your lead vocalist would be a serious blow for any band but Periphery soldiered on as a trio and you know what, they nailed it! The crowd took over on the vocals and a bad situation was turned into a unique and enjoyable experience for all. After all, the show must go on!

Hopefully Sotelo’s vocals will get better and the band can continue to kick major ass as they continue their Hail Stan 2020 US Tour!

We would like to thank Monica Seide-Evenson from Speakeasy PR for the credentials to review the show.