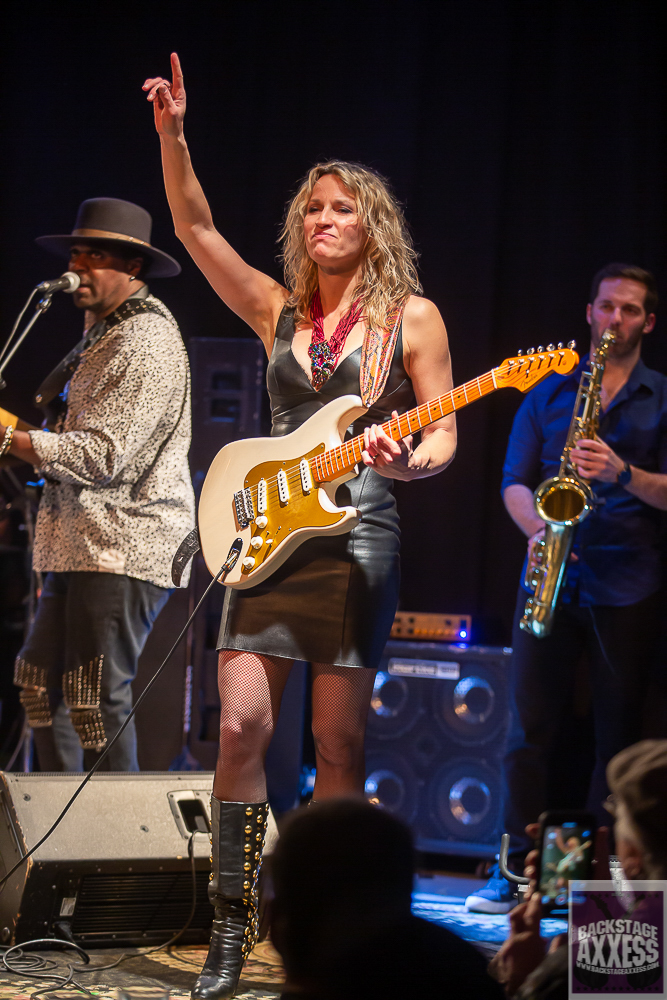 Ana Popovic brought her “Like It On Top” Tour to the Tralf Music Hall in Buffalo, NY last Thursday to a packed room of eager fans. The constantly touring Popovic is a frequent visitor to the area and is always well received. Her latest band incarnation included players who played the trumpet, sax, keyboard, bass and drums.

The band opened with a instrumental overture as Ana took the stage in a tight black leather dress and immediately broke into “Ana Shuffle.” This new band she has put together creates a very full sound onstage. It’s reminiscent of an old soul review show except with this type of show  Ana is on lead guitar playing at a blazing place. Now 20 years as a solo artist under her belt, she played a variety of new and old music with a few surprises thrown in. “Can You Stand The Heat” and “Love You Tonight” set the pace for the evening and it was a torrid one to say the least. Ana’s fiery playing and singing backed by the sax, trumpet, and a solid rhythm section made a wall full of bright & funky sound. It’s a style that would make James Brown proud. Changing tempo for the tune “Train,” the music slowed to a smoky blues pace with Ana soloing center stage. “Love Fever” from her first album was an uptempo tune with Ana again stealing the spotlight with her precise playing. Following was “Long Road Down” another uptempo number featuring a round of solos from all the band members. The Tom Waits song “New Coat of Paint” was given the Ana treatment and left no doubt of her skill as the song flowed from her fingertips. The Madrill song “Fencewalk” was  played out like a rock song with and her drummer trading solos.

As the night played on, Ana reached back again in her catalog to “Unconditional” and “Summer Rain” and brought out the slide to barrel through a few older tunes with another level of energy. “How’d You Learn to Shake Like That” boogied with Ana dancing as she played. “Brand New Man” and “Like it on Top” from the album of the same name brought a Keb’mo production vibe to the evening. He and Robben Ford were guests on that album and gave those songs a vibrant funky sound. The night played on beyond 2 hours of music. The whole band took turns in the spotlight on “Show You How Loved You Are.”  A two song encore of “Mo’ Better Love” and “We Can Change the World” emphasized Ana’s cause of empowering women in all areas. Her message is a strong one and she lives it every night onstage. If she comes by your town, you must get out to see her. The message is in the music and with someone like Ana delivering, it is as strong as it can be. She is the real deal.
Setlist:
Intro
Ana Shuffle
Can You Stand the Heat
Love You Tonight
Train
Love Fever
Sittin’ On Top of the World
Long Road Down
New Coat of Paint (Tom Waits Cover)
Can’t You See (Albert King Cover)
Fencewalk (Mandrill Cover)
Unconditional
Summer Rain
How’d You Learn to Shake It Like That?
Brand New Man
Like It On Top
Lasting Kind of Love
Show You How Loved You Are
Encore:
Mo’ Better Love
We Can Change the World
We would like to thank Steve Karas from SHKH Music for the credentials to review the show.