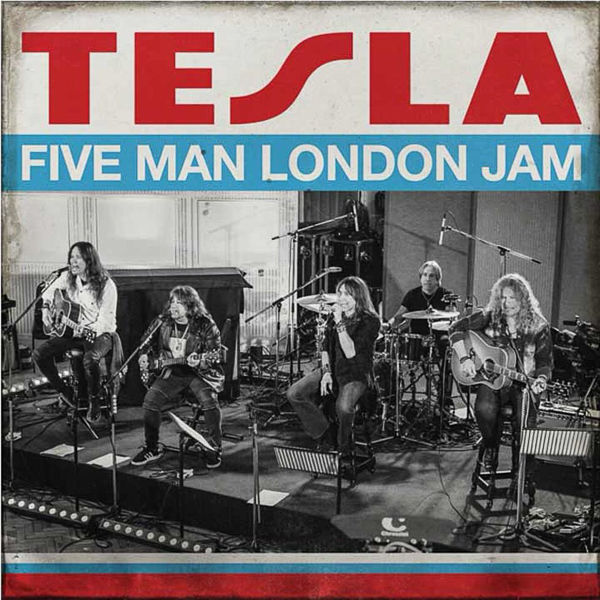 Tesla first made a splash in the rock world with their 1986 debut album “Mechanical Resonance” which spawned classic singles “Modern Day Cowboy” and “Little Suzi.” Furthering their bluesy rock vibe  with the 1989 follow up album “The Great Radio Controversy,” they cemented their place in history becoming  a serious force to be reckoned with . If those first two records didn’t make you stand up and take notice, their next release certainly would. In 1990, Tesla released a live, acoustic album named “Five Man Acoustical Jam.” The eponymous  record would become a Top 20 album, going platinum and  taking Tesla to heights never imagined. This year marks the 30th anniversary of this important album and what better way to celebrate the occasion than with another live, acoustic record, Tesla style.

“Five Man London Jam” was recorded and filmed (also available in Blu-ray) at the iconic Abbey Road Studios  in London, England. The new record marks the band’s first performance ever at this historical venue and is Tesla’s way of paying homage to their 1990 release.  Right off the bat, they hit you with “Cumin’ Atcha Live” which of course rolls right into the Grateful Dead classic “Truckin.” Anyone who has ever seen Tesla live knows that they put on a hell of a show so it’s no surprise that the band sounds fantastic with vocalist Jeff Keith performing perhaps even better than he did thirty years ago.  The record features classic Tesla tracks like “What You Give” and “Call It What You Will” along with a few songs from their latest studio release “Shock.” This includes their first ever live performance of “California Summer Song,” and a few other covers to be tossed in for good measure. Guitarists Frank Hannon and Dave Rude were rocking their acoustics while drummer Troy Luccketta kept the beat. Brian Wheat did double duty on bass and piano taking a spot behind the keys for some exquisite piano work on “Paradise.” Although the chit chat was kept to a minimum on the CD version, Keith still had time for some song intros including the song “Miles Away” which he said was for a friend that they lost a long time ago.  Of course, it wouldn’t be a Tesla live acoustic album without taking us back to the five man jam that started it all with their cover of the Five Man Electrical Band song “Signs.”  It also seemed absolutely appropriate to include “We Can Work It Out” by The Beatles. After all, they were at Abbey Road. The band closes things out with their hit single “Love Song” which they outro with another Beatles’ tune “All You Need Is Love,” perfectly capping off the collection.

Thirty years later, Tesla still brings the goods showing us once again that great music is timeless. Here’s to another 30 years and another Five Man Jam!