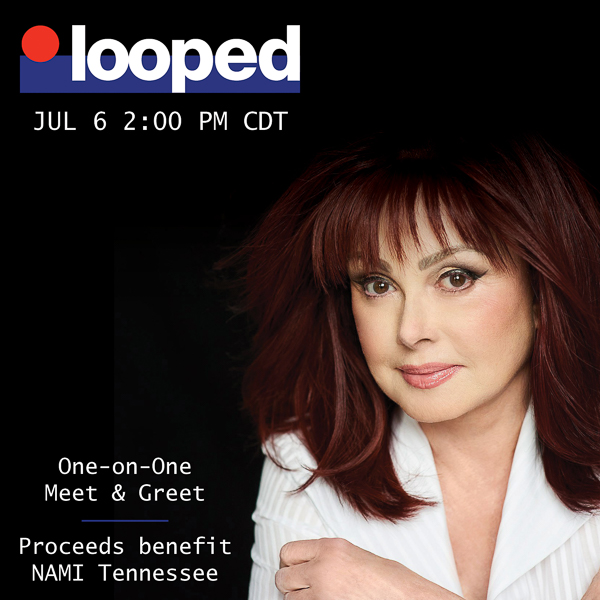 NASHVILLE, Tenn. – Country music icon, Naomi Judd, has partnered with Looped, a new platform that enables fans to video chat live with their favorite celebrities, for a one-on-one meet and greet event on July 6 at 2:00 p.m. CDT. Proceeds from the event benefit the National Alliance on Mental Illness Tennessee (NAMI) which provides advocacy, education, support and public awareness so that all individuals and families affected by mental illness can build better lives.

For tickets and more information for a virtual meet and greet with Naomi, click HERE.

“Thank you for joining me on Looped! I can’t wait to talk to each and every one of you. The proceeds from this event will be donated to NAMI Tennessee which is an organization very dear to my heart,” expressed Naomi.

The Hollywood Walk of Fame recently announced that The Judds, Naomi and Wynonna, will receive a star on the world’s most famous walkway. The five-time GRAMMY®, nine-time CMA and seven-time ACM Award-winning duo join Kelly Clarkson, Missy Elliott, Trisha Yearwood, Nick Cannon, Courteney Cox, Zac Efron and 28 other entertainers as part of the landmark’s newest class of 2021 inductees.

ABOUT NAOMI JUDD:
Naomi Judd is a GRAMMY® award-winning artist, New York Times best-selling author, philanthropist, motivational speaker and acclaimed actress. Hailing from the Appalachian foothills of Ashland, Ky., Naomi and her daughter Wynonna were first discovered by RCA label head Joe Galante in 1983 after landing a spot on WSM-TV’s “The Ralph Emery Show.” The Judds made their chart debut by the end of the year with “Had A Dream (For The Heart),” and country music’s sonic landscape changed after that. A fresh, crisp acoustic sound with undeniable harmonies surged across country radio stations throughout the 80s and early 90s. The Judds are often celebrated for their rarely-interrupted stretch of 14 No. 1 hits when every single of theirs released by RCA landed in the Billboard Top 10; and a career that defined what it means to be individualists in the music business. Throughout her illustrious career, Naomi has been honored with six GRAMMY®, nine CMA and seven ACM Awards. The Judds dominated touring in the 80s and early 90s, have sold more than 20 million albums and continue to give back to countless organizations. In 2021, The Judds will receive a star on the world’s most famous walkway, The Hollywood Walk of Fame. Be sure to follow The Judds on Facebook. Keep up with Naomi on Instagram, Facebook, Twitter and naomijudd.com.