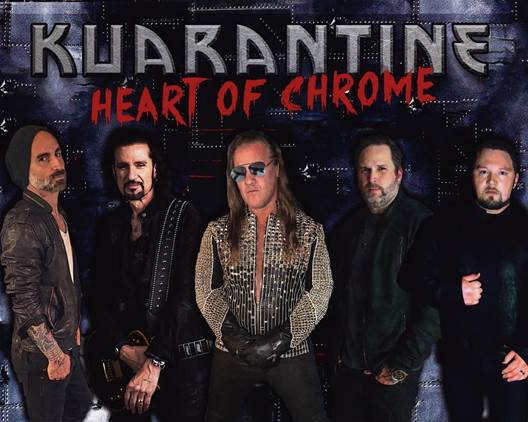 Kuarantine, a new rock ‘n’ roll band featuring Fozzy frontman and multi-hyphenate superstar Chris Jericho, has released their follow-up single “Heart of Chrome,” their latest KISS cover, featuring former KISS guitarist Bruce Kulick as a special guest. The all-star quartet, which debuted in May, is rounded out by Kent Slucher (drummer for Luke Bryan), guitarist Joe McGinness (of KLASSIK ’78) and bassist PJ Farley (of Trixter) with Jericho on vocals. In addition to his world-renowned wrestling career, first with World Wrestling Entertainment and now with All Elite Wrestling (AEW), Chris Jericho is the lead singer of the internationally successful rock band Fozzy, which will be releasing their new album 2020 this fall. Fozzy’s upcoming album, their eighth full-length, features the band’s latest single “Nowhere To Run,” their third Top 10 hit on Active Rock Radio. The pop culture icon is also the host of “The Rock Of Jericho” weekly radio show on SiriusXM Octane and the widely popular “Talk Is Jericho” podcast, as well as a four-time New York Times best-selling author and actor. For the past two decades, Chris Jericho has established himself as a multi-faceted talent with tens of millions of fans worldwide. For his latest project Kuarantine, Jericho has surrounded himself with a group of top-notch touring musicians. Kent Slucher has been the powerhouse behind the kit at Luke Bryan’s shows for the past 12 years, from small clubs to headlining stadiums and amphitheaters. Joe McGinness is a rising country singer/guitarist, who has shared the stage with artists such as Old Dominion, Florida Georgia Line and Granger Smith, and is also a member of KLASSIK ’78, a digital tribute to ‘70s KISS. Bassist PJ Farley rose to fame in the New Jersey-based gold-selling rock band Trixter, which toured with KISS, Poison, Scorpions and more in the ‘90s and has released two albums since reuniting in 2008. For more info, follow Kuarantine on Instagram @kuarantine_official or visit www.chrisjericho.com to follow Chris’s official social media accounts.