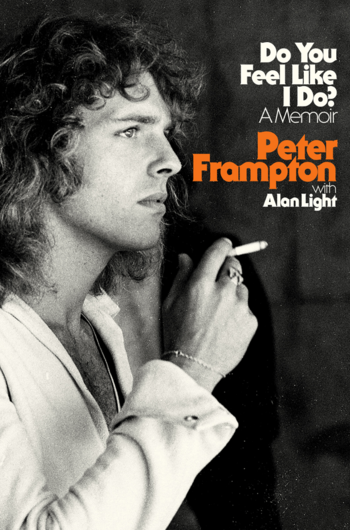 July 9, 2020—Do You Feel Like I Do?: A Memoir is the story of Peter Frampton’s life and career told in his own words for the first time. The book, written with acclaimed music journalist Alan Light, will be published in hardcover, e-book, and audio formats on October 20 by Hachette and is available for pre-order NOW. Limited editions signed by Frampton are also available.
The Grammy-winning artist shares stories of his diverse collaborative work and reveals both the blessing and curse of Frampton Comes Alive!, his breakout 1976 live album. He opens up about his experience grappling with fame at a young age, his overcoming substance abuse, and how he continues to play despite an inflammatory muscle disease. Woven throughout is the story of Frampton’s favorite guitar, which he thought he’d lost in a plane crash in 1980 but reappeared in 2011, saved from the wreckage.
“This is my journey,” Frampton says of the book. “All I ever wanted to do was play guitar and it’s taken me many different places—physically and mentally. I’ve been to the moon and back without a rocket, but also to the depths of despair. You never stop paying your dues. Failure has been my greatest inspiration. I brush myself off and then I want to ‘do it again.’ Do You Feel Like I Do?”
Frampton is among the most celebrated guitarists in rock history. His 1976 album, Frampton Comes Alive! remains one of the top-selling live records of all time and was inducted into the Grammy Hall of Fame in January. At 18, he co-founded one of the first supergroups, Humble Pie. By 22, he was touring incessantly and making use of the talk box which would become his signature guitar effect.
He’s collaborated with such legendary artists as George Harrison, David Bowie, Jerry Lee Lewis, and Ringo Starr, among many others, and he’s toured with the likes of Stevie Nicks, Greg Allman, Lynyrd Skynyrd, Cheap Trick, and the Steve Miller Band. In 2007, he won the Grammy Award for “Best Pop Instrumental Album” for Fingerprints, and in 2014 he was inducted into the Musicians’ Hall of Fame. His latest release, All Blues (UMe), was #1 for fifteen weeks on Billboard’s Blues Chart. Frampton has voiced himself in “The Simpsons” and “Family Guy” and appeared on “The Colbert Report” and “Madam Secretary.”