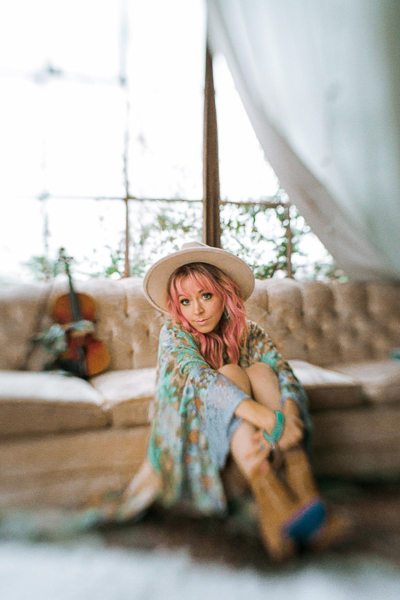 Lindsey Stirling
Announces Charity Outreach Program
The Upside Fund for COVID-19 Relief
Now Open For Donations
New Episode of Weekly Virtual Series
“String Sessions”
Featuring GRAMMY-Nominated Singer-Songwriter Jewel Out Now
PRESS HERE To Watch
Podcast Also Available With Extended Interviews
Releases Official Music Video for “Between Twilight”
Featuring Derek Hough – PRESS HERE To Watch
Artemis World Tour Rescheduled For 2021
Platinum-selling electronic artist, violinist, and multi-talented entertainer Lindsey Stirling has found a variety of new ways to connect with her worldwide fanbase this year, despite coronavirus upending her world tour to support her latest #1 album Artemis. To help families with dire economic needs as a result of COVID-19, Stirling created the charity outreach program The Upside Fund and, since its launch in April, has given hundreds of thousands of dollars to help. Today, June 30th, Stirling is announcing that The Upside Fund, named after her single “The Upside,” is now open to accepting tax-deductible donations and has extended its reach to include anyone with immediate economic assistance (such as housing/rent, utilities, medical bills, food) as a result of all of the events that have transpired recently across the globe. The goal of The Upside Fund, a project of Community Partners, a 501(c)(3) nonprofit charity, is to help anyone in desperate need of financial assistance. PRESS HERE to donate to The Upside Fund and PRESS HERE for more information or to apply for assistance.
“All of us have felt the effects of COVID-19,” shares Stirling. “If this would have happened when I was just starting out, it could have been the end of my career. With so many people at risk of losing everything, I knew I had to do something. I started encouraging my fans who are struggling financially to apply for assistance through my website so that I can try to help. Those of us fortunate enough to be able to give back have a responsibility to do whatever we can to help those who are in jeopardy during this hard time. It’s time for us to come together with our communities and lift where we stand.”

Stirling has also been creating content during quarantine and reaching her fans through the weekly virtual series String Sessions, which recently launched as a full podcast on all platforms. String Sessions began in early May and has featured Andy Grammer, Amy Lee from Evanescence, JP Saxe x Julia Michaels, Gabby Barrett and Johnny Rzeznik of Goo Goo Dolls. In tandem with the widespread launch of The Upside Fund, this week’s episode features GRAMMY-nominated singer-songwriter Jewel and showcases Jewel’s latest single “Grateful” – PRESS HERE to watch and PRESS HERE to stream/download on all digital platforms. Each episode of String Sessions opens with an acoustic performance of one of her guest’s songs accompanied by a string arrangement created by Stirling followed by an in-depth interview. New episodes will continue to debut on her YouTube every Friday, with the podcasts available on Mondays featuring extended interviews. PRESS HERE to watch past episodes and PRESS HERE to listen to the podcast.
“It was so fun to work with an iconic artist like Jewel but, even more than loving the song, I love who she is and what she stands for,” adds Stirling. “In our interview, she shared a lot about her personal story, and it left me feeling so uplifted and inspired.”
In other news, Stirling has rescheduled her Artemis World Tour for 2021. Supporting her fifth studio album Artemis, the 35-date North American outing, featuring special guests Kiesza and Mako, will begin July 3rd, 2021 in Kansas City. All previously purchased tickets will be honored for the new dates, with refunds available for those unable to attend. See below for the full list of 2021 Artemis World Tour dates and visit www.lindseystirling.com/tour for ticketing info.
Stirling also recently released the official music video for Artemis track “Between Twilight” featuring Derek Hough set amidst a magical fairytale. PRESS HERE to watch. Artemis, released September 2019 via BMG, debuted at #1 on Billboard’s Dance/Electronic Albums Chart and remained on the chart for 15 combined weeks. The 13-track album, which has surpassed 100 million total streams, also features the singles “Underground,” “Artemis,” “Sleepwalking” and “The Upside” featuring multi-platinum singer/songwriter Elle King along with “Love Goes On and On” featuring Amy Lee. Earlier this year, before the global shutdown, Stirling performed “Artemis” on top of the Launch Control Center at NASA’s Kennedy Space Center in honor of Women’s History Month – PRESS HERE to check out the performance. Stirling has also turned Artemis into a successful comic book series, with the second edition available now. PRESS HERE to listen to Artemis.
Since the release of her 2012 self-titled debut, Lindsey Stirling is known the world over for her unique, futuristic violin-driven electronic music. Raised in Arizona and based in Los Angeles, Stirling has racked up nearly 3 billion total views on YouTube and tens of millions of followers worldwide. Stirling’s sophomore album Shatter Me was certified Gold by the RIAA, after debuting at #2 on the Billboard Top 200 and #1 on the Dance/Electronic Albums Chart and holding the #1 spot on the Classical Albums Chart for 21 consecutive weeks. Her third studio album Brave Enough, featuring guest appearances from Dan + Shay, Christina Perri, Rivers Cuomo, Andrew McMahon and others, earned Stirling her second Billboard Music Award for “Top Dance/Electronic Album.” In 2017, Stirling released her first-ever holiday album Warmer In the Winter, featuring classic and original songs, marking the #1 new Christmas album of the year. Due to high demand from fans, a Deluxe Edition was issued in 2018. Additionally, Stirling co-wrote The New York Times best-selling book The Only Pirate at the Party with her sister Brook S. Passey, was the runner-up on Season 25 of “Dancing With the Stars” and has appeared on “America’s Got Talent.”
LINDSEY STIRLING – ARTEMIS WORLD TOUR 2021 TOUR DATES