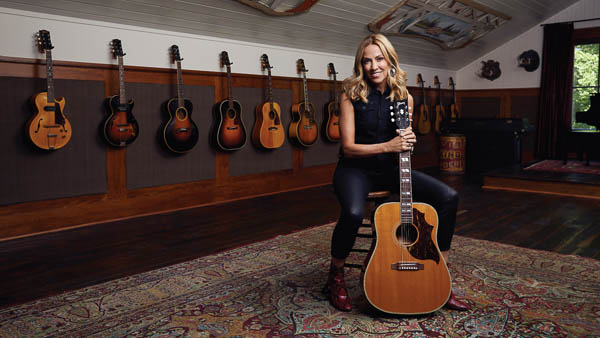 August 10, 2020 – As America approaches a historic opportunity to finally break the 231-year old glass ceiling in the nation’s 2nd highest office, nine-time Grammy Award winner Sheryl Crow today releases her new video for “Woman In The White House” (watch here: https://www.youtube.com/watch?v=UxQoqC2aLLA ), a rousing call to make this long-held dream a reality. “Our movement of strength grows as we take to the streets and make our voices heard,” said Crow. “We must not stop there. It is time for us to show up to the polls, be seen and heard as the great leaders we are.”

Directed by Peter Harding, “Woman In The White House” juxtaposes Crow with historical footage from the women’s suffrage movement and current scenes of peaceful protest from our Nation’s streets, reminders that the struggle for equality is long and hard fought. The song, produced by Steve Jordan and featuring soulful backing vocals from Lucius, rocks with rootsy energy and optimism, a Crow trademark.

Alongside the video, Sheryl Crow also announced her first commercially available 7 inch in over 20 years, a very limited-edition 45rpm single of “Woman In The White House”, to be mastered and pressed at the state-of-the-art vinyl production facility Third Man Pressing in Detroit. The b-side will be a new, unreleased song to be announced later this summer. There are no plans to release these songs in any other physical format. Just 500 copies of the red, white and blue splatter single will be available as a bundle package with a custom tye-dye t-shirt at www.sherylcrow.com with pre-orders starting today.  A portion of the proceeds from each sale will go to She Should Run, a nonprofit organization that provides women who are curious about public office with a starting place to explore their options. The vinyl/shirt bundles are available for order in the US and internationally while supplies last, with shipment in October.

ABOUT SHERYL CROW: Songwriter. Activist. Rock star. Woman. Champion. Mother. Nine-time Grammy winner Sheryl Crow is many things, but at the core, she remains a creative spirit channeling her talents into music that lifts people up, brings them together, and speaks to the truths on the horizon. Twenty-five years after winning her first Grammy, as well as Record of the Year and Best Female Pop Vocal Performance for “All I Wanna Do,” the Kennett, Missouri-born guitarist/vocalist/creative thought about all she’d done, the places she’d been, the lives that’d touched hers – and saw the rich tapestry her journey had become. Crow’s is a career beyond dreams, with songs that defined the third wave of feminism, a rockist’s ability to sweep the pop charts without losing any edge and enough wide-open Midwestern joy to captivate the world. In 2019, Crow released her critically acclaimed album THREADS via The Valory Music Co., a collection of collaborations made with and in tribute to artists with whom Crow has musical connections. And in turn, she seeks to inspire people through her music and songs, especially the younger generation. “The passion and ability of our young people to dig deep and express themselves energizes and encourages me endlessly,” Crow says. “It thrills me to see their passion and will to change the world.” With new relevancy ahead of the 2020 election, Crow offers a rousing, reimagined take on her 2012 b-side, “Woman In The White House” as people await the announcement of Democratic Presidential Nominee Joe Biden’s female running mate.