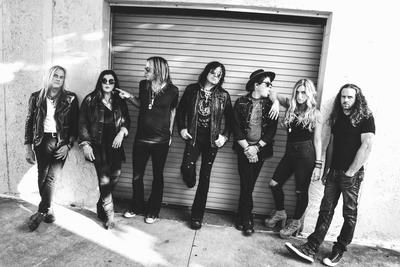 TOM KEIFER #KEIFERBAND
BRINGS THE CONCERT EXPERIENCE HOME TO FANS WITH
THE NEW VIDEO, “ALL AMPED UP,”
RELEASED TO MARK THE ONE-YEAR ANNIVERSARY OF
CRITICALLY ACCLAIMED ‘RISE’ ALBUM
September 14, 2020 – Yesterday marked the one-year anniversary of the release of RISE, the second album by TOM KEIFER #keiferband–Savannah Keifer, Tony Higbee, Billy Mercer, Kendra Chantelle, Jarred Pope and Kory Myers. Since they’re not able to celebrate the momentous occasion with their legions of loyal fans in person, they’re bringing the rockin’ concert party home with the new video for the album’s latest single, “All Amped Up. “
The video for “All Amped Up” (written by TOM KEIFER and Savannah Keifer) features live and behind-the-scenes footage shot over several years including their last round of 2019 and 2020 tour dates, which kicked off in Nashville, TN at The Cowan on July 30, 2019. The clip—filmed, produced and edited by Tammy Vega, with additional footage provided by Ryan Azevedo–can now be viewed on Cleopatra Records’ YouTube channel here.
“The song ‘All Amped Up’ was inspired by and written to describe the reckless abandon and rush of a loud rock show,” explains KEIFER. “With all the concerts being cancelled this year, I think everyone is starving for that feeling. We’ve filmed so much footage of #keiferband over the last few years and thought since we can’t all be together during this pandemic, we would make a video that brings the show to you. The energy and lyrics of ‘All Amped Up’ felt like the perfect song for a video that would capture that concert energy as well as the feeling of being on tour. We are really missing all of you and looking forward to seeing you out there in 2021! In the meantime, here’s a little ‘Supersonic slam and tonic…all amped up.”
Released September 13, 2019 on Cleopatra Records, RISE quickly jumped into the Top 40 on Amazon’s “Best Seller” list within hours of its release, and it debuted at #10 on Billboard’s “Hard Rock Album Sales” chart, #17 on the “Independent Albums” chart, #19 “Internet Albums” chart, #21 on the “Rock Album Sales” chart, #41 on the “Top Current Albums (Sales)” chart and #46 on the “Top Album Sales” chart.
RISE is available on all formats at Orcd.co/TomKeiferRise, including CD (digipak), vinyl (in your choice of red, blue, or green) and digital.
Since its release, RISE has garnered rave reviews…
“…A gem of a record that manages to walk the line of recaputuring the heart of his early works yet still feels totally vibrant for today …moments that shine best here are the album opening “Touching The Divine”, “The Death of Me”, the Stones-ish balladry of “Waiting On The Demons” and “HYPE”. Keifer’s second act is something to rise up and cheer. – Chad Childers, Loudwire (“Top 50 albums of 2019”)
“…a return to form for KEIFER and company. RISE features a cross section of tunes that cull inspiration from NIGHT SONGS and LONG COLD WINTER with a potent, modern age punch that will please diehard and casual fans alike. On RISE, KEIFER is showing the kids and his contemporaries how it’s done. Well done KEIFER BAND. 5.0 Out Of 5.0” — Ruben Mosqueda, KNAC.com (#3 Top 10 albums of 2019)
“TOM KEIFER is an outstanding guitarist and songwriter, and that’s apparent on his solo music. KEIFER’s 2019 release, RISE stands out for its gritty songs and riffs, with each track offering its own character.” — Anne Erickson, Audio Ink Radio  (#22 Best Albums of the Decade: Rock and Metal in the 2010s)
“The former Cinderella mastermind’s second solo release contains Rolling Stones nods (‘Waiting on the Demons,’ ‘Breaking Down’), Cinderella-styled scorchers (‘All Amped Up,’ ‘Life Was Here’), and modern sounds (‘The Death of Me,’ ‘Hype,’ ‘Untitled’). ‘You Believe in Me’ is a soul-baring tribute to his wite/songwriting partner/bandmate, Savannah. KEIFER and Tony Higbee trigger ringing acoustic and electric parts throughout.” — Bret Adams, Vintage Guitar
“In sum, with RISE, TOM KEIFER succeeds in proving (once again) to be an artist who knows no creative boundaries and remains in a league of his own.” — Christopher Long, Ink19.com
www.TomKeifer.com
www.facebook.com/TomKeiferOfficial
www.twitter.com/TomKeiferMusic
www.instagram.com/TomKeiferofficial
www.youtube.com/user/TomKeifermusic