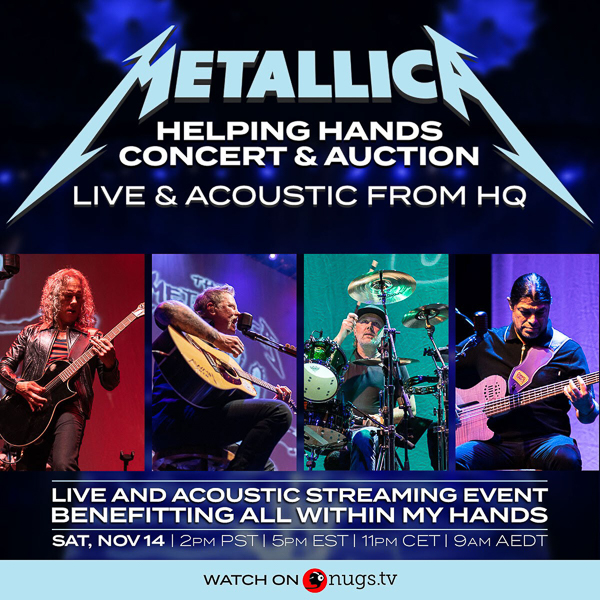 2020 was meant to be a year where Metallica planned to do what they do – hit the road and play live!  Although the COVID-19 pandemic postponed the tour plans, the band will meet the ambition of providing fans access in another form, by webcasting a truly live performance from the band’s HQ in Northern California. To make the event even more unique for fans, this will be an acoustic performance, with 100% of proceeds going to their foundation, All Within My Hands. The show will be live-streamed by nugs.net, the leading platform for live concerts, and home to hundreds of live Metallica shows, among others.

Tickets for the November 14th, 2:00PM PST live stream on sale now via nugs.tv for $14.99.  The performance will be made available for ticket holders to watch at any point, and as many times as they like within a 48-hour window from when they first start the stream. A select number of premium and VIP packages with show-specific merchandise from fan-favorite artist Wolfskulljack can be purchased at 2nu.gs/Metallica.

Brad Serling, nugs.net Founder and CEO, adds, “I’ve worked with Metallica for 25 years, and we’ve released hundreds of shows on nugs.net.  We were looking forward to heading out on the road with them in 2020.  Streaming videos from their archives for 26 weeks on Metallica Mondays helped fill the void during COVID, but nothing beats seeing the band perform live.  Allowing fans to see the band live from their home studio in an effort to raise funds for All Within My Hands bridges the gap to connect fans worldwide with the band.”

About nugs.net
Founded in 1997 as a fan site for downloading live music, nugs.net has evolved into the leading live music platform for the largest touring artists in the world. Bruce Springsteen, Metallica, Pearl Jam, Phish, Jack White, Red Hot Chili Peppers, My Morning Jacket and many others distribute recordings of thousands of concerts they play through nugs.net. The platform offers live streams, downloads, CDs, Video on Demand, and the only streaming service dedicated to live music, delivering exclusive live content to millions of fans daily. nugs.net is available on iOS, Android, AppleTV, Sonos, BluOS, and Desktop.  A free 30-day trial is available. Visit nugs.net or get the app at nugs.net/app.

About Metallica
Formed in 1981 by drummer Lars Ulrich and guitarist/vocalist James Hetfield, Metallica has become one of the most influential and successful rock bands in history, having sold nearly 120 million albums worldwide and generating more than 2.5 billion streams while playing to millions of fans on literally all seven continents. The band’s several multi-platinum albums include Kill ‘em All, Ride The Lightning, Master of Puppets, … And Justice for All, Metallica (commonly referred to as The Black Album), Load, Reload, St. Anger, Death Magnetic, and Hardwired…to Self-Destruct, released in November 2016 and charting at #1 in 32 countries.

Metallica’s awards and accolades include nine Grammy Awards, two American Music Awards, multiple MTV Video Music Awards, and its 2009 induction into the Rock & Roll Hall of Fame.  In June of 2018, the band was awarded one of the most prestigious musical honors in the world: Sweden’s Polar Music Prize. Metallica’s newest release, the S&M2 album and film, arrives August 28 on the band’s own Blackened Recordings label. S&M2 chronicles Metallica and San Francisco Symphony’s September 6 & 8, 2019 S&M2 concerts that served as the grand opening of San Francisco’s Chase Center and reunited the band and Symphony for the first time in 20 years. S&M2 brings those historic shows back to life, capturing more than two and a half hours of James, Lars, Kirk Hammett and Robert Trujillo joining forces with the nearly 80-strong SF Symphony, legendary Music Director of the orchestra Michael Tilson Thomas, and conductor Edwin Outwater.

About All Within My Hands
All Within My Hands is a 501(c)3 non-profit foundation established in 2017 as a way for the Metallica family to give back to communities that have supported the band.  Their mission is to create sustainable communities by supporting workforce education, the fight against hunger, and other critical local services.  Just this year, AWMH has donated $645,000 to COVID-19 related relief funds including Feeding America, Direct Relief, as well as to charities assisting those in the entertainment and hospitality industries suddenly without work. More recently the foundation donated $350,000 to aid those affected by the West Coast wildfires. Finally, the foundation’s Metallica Scholars Initiative is now in its second year, supported by a $1.5 million grant benefiting 15 community colleges across the country.  All expenses are covered by the band and board members. . . . every penny donated goes straight to their charitable partners.