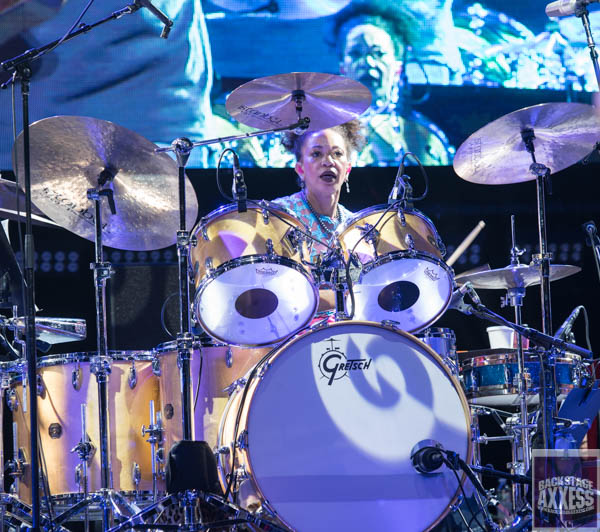 Cindy Blackman Santana Releases “Mother Earth” Music Video
For Amazon Aid Foundation;
Joins Amazon Aid’s Artists for the Amazon To Help Protect & Preserve The Rainforest
Cindy Blackman Santana is a virtuoso drummer whose artistry spans the realms of jazz and rock. She is a sound innovator with a passion for pushing creative boundaries and exploring movement and change. This powerful commitment resounds in a new music video, “Mother Earth,” made in collaboration with producer Sarah duPont and director Jon Fine for Amazon Aid Foundation.
WATCH HERE
“I implore each and everyone, to make conscious choices to help support and SAVE our Earth’s lungs – the Amazon!’ says Blackman Santana. “This beautiful life support system is vital and a key element in our very survival and quality of life. Mother Earth is calling you, please answer with love.”
The film takes viewers on a journey into the world’s largest rainforest, one that is under environmental threat and at the tipping point of no return. Director/Editor Jon Fine, who is also a musician, unites the increasing tempo of Blackman Santana’s extraordinary music with a montage of scenes from Amazon Aid’s extensive video library, National Geographic videographer Bertie Gregory, and library footage. Natural sounds from the jungle are woven throughout for a moving and immersive experience.
“When I first heard Cindy’s incredible track, I could immediately feel its connection to an urgent call to protect the Amazon rainforest. Jon masterfully connects her exquisite piece to visuals that create a beautiful and haunting metaphor for how quickly we are losing sacred land that is vital to all of humanity,” says Sarah duPont the video’s producer and Founder of Amazon Aid.
During her illustrious career, Blackman Santana has performed with a prestigious and diverse group of artists and she has released a string of critically and commercially hailed solo albums including Give The Drummer Some, which released on September 18th. An advocate for social and environmental justice, she is a longtime supporter of Amazon Aid Foundation. This collaboration on “Mother Earth” is an inaugural project for Blackman Santana as one of the organization’s Artists For The Amazon, a program that raises awareness to change hearts and minds through art. It is released as fires rage in the Amazon and throughout the Western United States.
“The burning we experience in the US is connected to what’s happening in the Amazon – both scientifically and philosophically. Whether by arson or by climate change, these are the effects of exploitation of living systems,” relates duPont. “We need substantive shifts – in policy, in consumption, and in how and what we value. It takes hope and courage, along with the ability to really connect to what’s at stake. That’s where artists play a pivotal role.”
Facts About The Amazon Rainforest:
Find out more about what’s happening in the Amazon and how to help: https://amazonaid.org/amazon-ambassadors/
Amazon Aid Foundation (AAF) is a 501(c)3 nonprofit organization harnessing the power of multimedia and film to educate about the importance of the Amazon and the implications of its destruction while promoting working solutions to protect it. AAF’s award-winning projects affect global policy change and activate audiences worldwide to engage in sustainable approaches to protect the Amazon and demand responsibly sourced products.‎ Our multimedia, accompanying educational curriculum, and social impact campaigns empower alliances of students, scientists, artists, NGOs, governments, and global citizens, and support stakeholders in the Amazon to further legislation and sustainable methods to protect and revitalize the rainforests. AAF supports and promotes advocacy efforts related to human and indigenous rights, clean water, the protection of species and habitat, and the regulation of illicit and unregulated gold mining and mercury usage. https://amazonaid.org/
Cindy Blackman Santana is a virtuoso drummer whose artistry spans the realms of jazz and rock. As a bandleader and as a musician, Cindy is a sound innovator with a passion for pushing creative boundaries and exploring movement and change. She is as known for the nuances and colors she brings to her beats and fills as she is for the sheer power of her soulful playing. From the beginning of her career as a busking street performer in New York City in the ’80s through the present day, Cindy has been touring the globe and making albums with artists including Pharoah Sanders, Cassandra Wilson, Bill Laswell, Joss Stone, Joe Henderson, Buckethead, Don Pullen, Hugh Masakela, and Angela Bofill. She writes, records, and performs with her own bands, Cindy Blackman Santana Group and Another Lifetime, which released its critically-acclaimed self-titled debut in 2010. From 1992 to 2007 and again in 2014 and 2015 she was the drummer in Lenny Kravitz’s band, performing through multiple world tours and hit albums. In 2011, she joined forces with Vernon Reid, Jack Bruce, and John Medeski to form the celebrated Spectrum Road, which released an album and tour dedicated to the music of Tony Williams. In 2016, Cindy joined Santana full-time and has been mesmerizing audiences around the globe ever since. In 2017, she and Carlos teamed up with the Isley Brothers to release “Power of Peace” (SONY) and followed it up with the two most recent Santana releases: the EP In Search of Mona Lisa (2019) and full-length Africa Speaks (2019). In September 2020, she delivered a new solo album Give the Drummer Some, with songs that span the realm of jazz, rock, and funk and featuring Cindy’s incredible versatility both behind the kit and in front of the microphone. https://cindyblackmansantana.com/