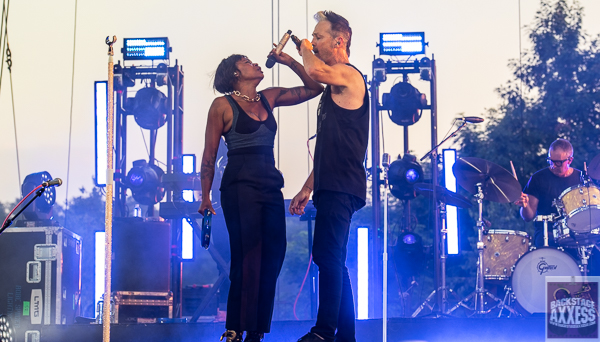 The first Tuesday Coors light Concerts at Artpark series started out with a bang. The indie pop outfit Fitz and the Tantrums along with Colony House both made their Artpark debuts this past Tuesday night.  Its been 22 months since the last show graced the stage on Tuesday at Artpark  (Foreigner on August 27, 2019 to be exact).

Colony House from Nashville, Tennessee started the night off playing a 40 minute set. Led by rhythm guitarist and vocalist Caleb Chapman, the bands indie rock flavor were the perfect appetizer for Fitz and The Tantrums. The band just released a few singles over the lasts several months titled the “O Ya” and “Lights On.” The band opened up with “Lights On” but for some reason, didn’t play “O Ya.” Chapman dedicated the song “Julia” to his girlified who he wrote the song for. They defiantly caught the ear of the WNY crowd and I think made some fans along the way.

Making their first WNY appearance in over 3 years, Fitz and The Tantrums got the Artpark crowd dancing from the opening notes of “Don’t Gotta Work it Out” until and hour and 35 minutes later when they finished yup with their hit song, “The Walker.” Their is a lot of kinetic energy between singers Michael Fitzpatrick and Noelle Scaggs. The band also included multi instrumentalist James King who went back and forth between the keyboards and saxophone all night. Fitzpatrick told the crowd at one point he was a 1000% certified mama’s boy. He also said and my mama didn’t raise no fool as the band proceeded into the song “Fool.” Scaggs who is a whole ball of energy and didn’t stop singing and dancing the entire performance. To show you how much energy she had, she busted her tambourine during “6Am!” Her blend of harmonies really provides Fitzpatrick to be able to lead the way he does vocally. Fitzpatrick got everyone to use their lights on their cellphones during the song “Shine.” They played “MoneyGrabber and dedicated to the longtime fans who been fans since the very beginning.  Even though the crowd were energetic the entire night, I think it went up a notch during the bands hit song “Handclap.”

I believe we will be seeing a lot more of this band on the Artpark stage in years to come.  This was a lot of peoples first show since the pandemic started. With the amount of moving and crowd participation that went on during this show, it shows how much music can really make a difference in the overall mental health of one’s self.

Don’t Gotta Work It Out

Out of my League

Livin’ For the Weekend

We would like to thank Dave Wedekindt from Artpark for helping getting the credentials to review the show.