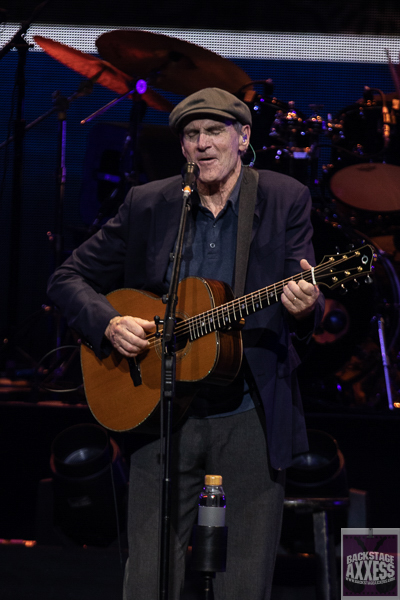 James Taylor and Jackson Browne have combined experience of over 110 years of entertaining fans. Both started their careers in the mid 1960’s and both are in the Rock ‘n Roll Hall of Fame and the Songwriter’s Hall of Fame. The longtime friends brought their 2021 tour to the St. Joseph’s Health Amphitheatre at Lakeview in Syracuse, NY last Sunday in front of a packed house. The beautiful venue was the perfect setting for a night of classic pop music. Both Taylor and Browne pulled from their repertoire of hit songs spanning seven decades of recordings each.

Jackson Browne opened his 10 song set with the title track to his 1993 album “I’m Alive” followed by “The Long Way Around.” His backing band sounded as good as you would expect from a seasoned musician. Browne and Taylor both brought with them an array of top musicians and backup singers. Each of them brought a freshness to every song that was performed.
Browne continued with “The Long Way Around” and “Fountain of Sorrow.” Both were heartfelt renditions in his honest, storytelling style. Browne definitely still has the vocal stylings of his younger self. A rousing “Rock Me On The Water” from his 1972 debut album had the crowd singing along. Not one to be shy, “Downhill from Everywhere,” the title track of his current release and another new song called “Until Justice Is Real,” brought out Browne’s political views with sharp social commentary. The message in his music continues to be as strong as ever.
His last four songs were some of his most popular. The first notes of “Doctor My Eyes” brought the crowd to their feet. A mellow “Late For The Sky” followed. Then Browne called out James Taylor to sing with him on “The Pretender” and “Running On Empty.” The applause cut through the warm, muggy air as Browne and his band took a bow and exited the stage to a standing ovation.
After a brief intermission, the crowd was treated to a fun video of James Taylor fans singing “Fire and Rain” and thanking him for being a powerful influence on their lives.  The many fans in attendance would agree by responding with big smiles and singing along.  It was a special recognition for a man that has touched so many with his music.
Violinist Andrea Zahn soloed in a spotlight and the other musicians took their places and started playing. That brief time before Taylor appeared onstage, he  showcased his “All Star Band. ” they were Steve Gadd, “Blue” Lou Marini, Michael Landau, and Jimmy Johnson. It was a nice way to give each musician a small moment before Taylor’s set officially started.
Opening with “Country Road,” Taylor was in top form. The next tune of his 18 song set was “Copperline,” where Zahn accompanied with a delicate violin solo. The stories continued with “That’s Why I’m Here,” a loving tribute to his late friend, John Belushi. Taylor related his own struggles with addiction and stated Belushi’s death led to him going sober.
Next up was a lively “Mexico” where percussionist Michito Sanchez took over and gave a lesson in funky drumming. After “You Make It Easy,” Taylor got a little political himself with “Line ‘Em Up.” The song is about former President Nixon’s  last walk out of the White House after resigning. The Jazzy “Chili Dog” was followed by a nasty, snarling version of “Steamroller Blues.”
“Easy As Rollin’ Off A Log” was next from Taylor’s 2020 “American Standard” album released just as Covid 19 ravaged the music business. The painful memories of last year all went away with Taylor’s closing line up of hits starting with “Sweet Baby James” and closing with “How Sweet It Is (To Be Loved By You). The crowd definitely got more into it  as it got deeper into the set. It seemed more like a crescendo as the emotion built up to the end.
A four song encore began with Taylor and his backup singers gathering at center stage. They sang “Shed A Little Light,” The Eagles  “Take It Easy” and Carole King’s “You’ve Got A Friend” with Jackson Browne joining in. For the final song, Taylor’s son Henry joined him for a magical “You Can Close Your Eyes.” Henry Taylor is a 19 years old and it seems he already has his father’s rich voice and stage presence.
As he left the stage, Taylor thanked the crowd for coming in his own humble way. It was a night of new and old songs performed by two of the masters of songwriting. There were no pyrotechnics, lasers or smoke effects. Just pure old fashioned musical talent.
Setlist:
Jackson Browne
I’m Alive
The Long Way Around
Fountain of Sorrow
Rock Me On The Water
Downhill From Everywhere
Until Justice Is real
Doctor My Eyes
Late For The Sky
The Pretender (w/ James Taylor)
Running On Empty (w/ James Taylor)
James Taylor
Country Road
Never Die Young
Copperline
That’s Why I’m Here
Mexico
You Make It Easy
Line ‘Em Up
Chili Dog /Steamroller
Sweet Baby James
Fire and Rain
Carolina on my Mind
Shower The People
How Sweet It Is (To Be Loved By You) Marvin Gaye cover
Encore
Shed A Little Light
Take It Easy (Eagles cover with Jackson Browne)
You’ve Got A Friend (Carole King cover with Jackson Browne)
You Can Close Your Eyes (Duet with Henry Taylor)
We would like to thank Tim Tobin from Livenation for his assistance in obtaining the credentials so BackstageAxxess could review the show.