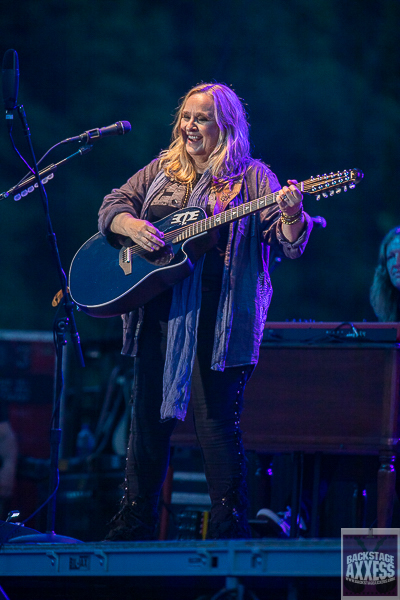 Since Melissa Etheridge burst onto the music scene in 1988 with her self-titled debut album, she has consistently put out a long list of hits and collected numerous awards including and Oscar, Grammy and others. Her latest tour brought her to the Outdoor Stage at Artpark in Lewiston, NY last Tuesday. This tour features a different setlist every night. Etheridge chooses two of her albums and features songs from them with some background info. It makes for some surprises in a show that also dishes up her biggest hits to satisfy the loyal fans.

As a performer with years of experience, Etheridge has drawn a variety of followers to her live shows. She receives much support as a cancer survivor and this show was no different. Constant applause and shouts of “We love you, Melissa!” were given throughout the evening. As a a result of receiving all of that love, Etheridge pays it back ten-fold. A nineteen song set went from her earliest hits to her latest. She opened up with her newest single “One Way Out” that will be released in September. The album is a collection of songs written between 25 and 30 years ago that just weren’t ready to be released at that time. The song sounded like what would you expect from a Etheridge song to sound like. Full of acoustic love and that powerful voice that she still continues to have. The Etheridge die hards were super happy that “Kiss Me” off of ‘Lucky’ was also included in the set list. this hasn’t been played live much at all since being released back in 2004.  She also paid tribute to the passing of Rolling Stones drummer Charlie Watts who passed earlier in the day by playing “Miss You.”
Her raspy voice can still is able raise the hair on your neck. Etheridge performs each song full of passion and delivers it with her trademark torchy snarl. The message in her music is love, it’s always been about love. She gives all she has and she always delivers. If this tour passes close to you, make the trek to her stage. You will not regret it.
Setlist:
One Way Out
Your Little Secret
Let Me Go
No Souvenirs
I Know You
You Used to Love to Dance
Ain’t It Heavy
Meet Me in the Back
Must Be Crazy for Me
I Want to Come Over
For the Last Time
Chrome Plated Heart
Lucky
This Moment
Kiss Me
Come to My Window
Bring Me Some Water
Honky Tonk Woman (The Rolling Stones cover)
Encore:
Like the Way I Do

We would like to thank Dave Wedekindt from Artpark for his assistance in obtaining the credentials to review the show.