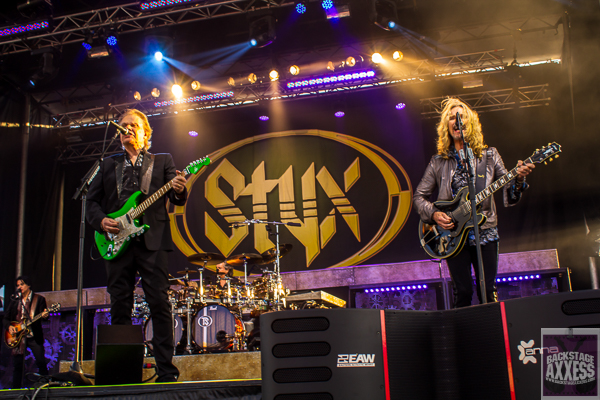 Styx returned to Western New York on Sunday night for a performance at the Erie County Fair. The now six-piece ensemble delivered two sets of music drawing from the group’s extensive catalogue, and two latest albums, “The Mission” and “Crash of the Crown.”

As one of the classic rock era’s most popular bands, Styx could easily perform only their hits and still draw a crowd. Instead, the band opted to add a healthy dose of “Crash of the Crown” material, and the result was a seamless set of songs that kept fans engaged.

The 22-song performance opened with “The Fight of Our Lives” from “Crash of the Crown” and then the group delivered three hits in succession, “Blue Collar Man,” “The Grand Illusion” and Lady.”
The current lineup is a well-oiled machine, and they performed the new and old songs with an intensity that was infectious. The crowd was surprisingly receptive to the new material, and sang along with every word when Styx broke out one of their classic songs.

Tommy Shaw and Lawrence Gowan took turns speaking to the audience, sharing stories behind the songs and other anecdotes. Gowan noted that he lived close to Erie County north of a “big waterfall.”
Before he performed “Man in the Wilderness” a deep cut from “The Grand Illusion,” Tommy noted that he wanted to write a song like Kansas after seeing them perform live. James “J.Y” Young handled lead vocal duties on “Light Up” from “Equinox,” and sang “Miss America” early in the second set. J.Y’s guitar solos were fantastic all night.

It was Will Evankovich’s first visit to the Buffalo area as a full-time member of the band. Evankovich and Shaw have been responsible for most of the band’s new material, and Styx performed six songs from “Crash” and two songs from “The Mission,” so the addition of Evankovich made sense, and he added crucial elements to the newer material.

The group performed “Mr. Roboto” as their first encore, something they have been doing for a couple of years now. They closed with a fiery version of “Renegade” which kept everyone in their seats until the very end. Drummer Todd Sucherman and bassist Ricky Phillips were phenomenal as usual. The pair holds the entire set together and delivers a huge low end. As Styx approaches their fiftieth anniversary, they still sound fresh and vibrant, thanks to some great new material and their willingness to perform it live. If they come to town, make sure you check them out.

The Fight of Our Lives

Too Much Time on My Hands

Save Us From Ourselves

Crash of the Crown

Fooling Yourself (The Angry Young Man)

We would like to thank Amanda Cagan from ABC PR for the credentials to review the show.