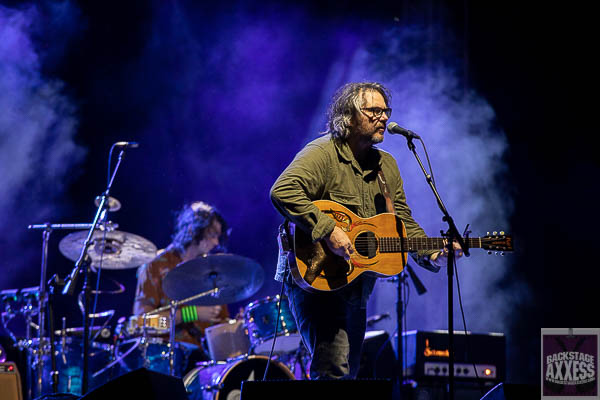 Wilco brought their “It’s Time” 2021 tour to the outdoor stage at Artpark in Lewiston, NY last Thursday to a very enthusiastic crowd. Sleater Kinney and Naamdi were openers. As the crowd filed in the skies were threatening rain. It made no difference to this crowd. Wilco is a band with a cult-like following. Those that religiously follow the band were there enmasse, many sporting Wilco t-shirts and other garb.

Band leaders Jeff Tweedy and John Stirratt were out first and quickly started with “A Shot in the Arm,” one of the many fan favorites they would play tonight. “Random Name Generator” and “Via Chicago” followed. The rainy weather forced about a 30 minute delay and as the band returned to the stage, the crowd was encouraged to sing along and party with the band. The rest of the night showed Wilco’s diverse styles from the progressive “Art of Almost” to the Indie pop hit “Born Alone” and the country-flavored “Love is Everywhere.”  They closed the show with the rocking “I’m Always in Love.” They had the crowd chanting for more.

The encore was one of the most popular Wilco songs, “Outtasite (Outtamind).” If the Wilco bandwagon rolls into your town, make it a point to jump on. It will be quite a ride.

Setlist:
A Shot In The Arm
Random Name Generator
Via Chicago (debut for this tour)
Art of Almost
If I Ever Was a Child
Impossible Germany
Love Is Everywhere (Beware)
One Wing
Hummingbird
Everyone Hides
Box Full Of Letters
Born Alone
Jesus, Etc.
Theologians
I’m The Man Who Loves You
Heavy Metal Drummer
I’m Always in Love
Encore:
Outtasite (Outta Mind)

We would like to thank Dave Wedekindt for obtaining the credentials so BackstageAxxess could review the show.