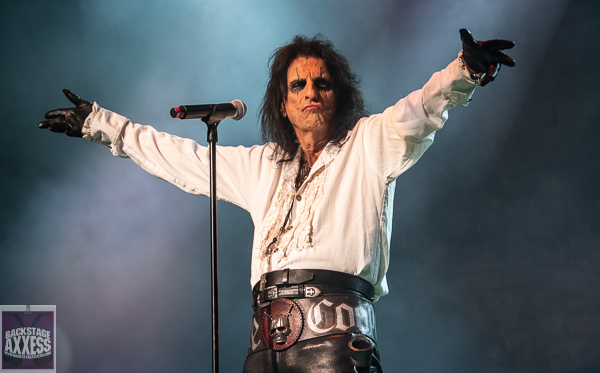 What happens when you combine two of the most influential rockers of all time? You have a hell of package tour that’s what. The father of shock rock, Alice Cooper and legendary guitarist Ace Frehley are teaming up for a 6 week tour that will last in late October.  The last date added to the tour was this date in Utica, NY at the famed Stanley Theater. The venue known mostly for theater productions, was ready for this two punch of rock with the venue almost completely sold out. This was the 4th show of of the tour and was interesting to see if the bands would still be working out the setlists and how production for each would be like.

Opening the night was former KISS guitarist Ace Frehley. Frehley’s resume speaks for itself as he co founded one of the biggest bands of all time in KISS. He also has inspired more guitar players than just about any other guitar player (dead or alive). Frehley has actually been a solo artist longer than his stints were in KISS. His latest solo release is a selection of covers called ‘Origins’ II.’ Unfortunately, he wasn’t able to tour in support of it until now. So with Frehley being an opening act, he had 50 minutes to play with. So that means a lot of songs that fans were expected to be played had to be dropped because of time restraints. It was all about giving the masses the most ear candy for the amount of time he had. Frehley’s band concentrated mostly on KISS classics with a few covers from ‘Origin’s II.”  “Rip It Out” was added back in the set too which will please longtime fans. Of course, Frehley brought out the light up guitar for “New York Groove” and the smoking guitar for “Shock Me.” It was solid set by Frehley and his band which consists of Matt Starr on drums, Jeremy Asbrock and Ryan Spencer cook on rhythm guitar with Phillip Shouse rounding the band band out on bass.

Alice Cooper took the stage at around 8:45pm as the band kicked into “Feed my Frankenstein.” A song that usually has a place later in the set due to the theatrics that go along with it, showed that Cooper was all business right from the get go. Cooper, like Frehley, also released new music earlier this year. His new album is called ‘Detroit Stories.’  Cooper also dipped into the album playing 3 tracks. “Go Man Go” was the one track that stood out to me. It had a great flow with all 3 guitarists taking turns playing leads on it.  Most of the standards for Cooper were played including, “Billion Dollar Babies.” An overgrown deranged Chucky baby  joined the band on stage during the song. Many other classic songs like “Under My Wheels and “I’m Eighteen” seemed to garner the most applause.

Cooper’s band consists of Glen Sobel on drums, Chuck Garric on bass and Tommy Henriksen, Ryan Roxie and Nita Strauss all on guitar. Cooper has had many incarnations of the band over the years but I must say, this might be the best outfit he ever had. Each of the 3 guitarists work together and all play equal leads. Strauss did enjoy a small solo within the set.  Having 3 guitarists really fills the sound. Cooper has done it right for well over 50 years. one of the most consistent performers on the circuit. During these times of of uncertainty, there is one thin you can always count on; death, taxes and a great show performed by Alice Cooper.

He’s Back (The Man Behind the Mask)

I love the Dead

Rip it Out (KISS song)

Never in my Life (Mountain cover)

We would like to thank Amy Sciarretto from Atom Splitter PR and John Ostronomy from Ace Frehley’s Management  for the credentials to review the show.